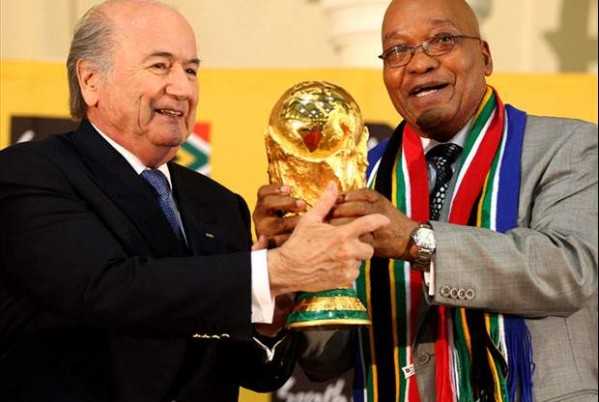 In a statement, Mbalula said: “We reject these falsehoods with the contempt they deserve. As a government and people of South Africa we are enjoined to combat such propaganda against our country.

“Accordingly, we appeal to all our people, media included to desist from speculating on names of individuals who may or may not be implicated in the allegations.”

Earlier on Sunday, comment was not immediately available on Sunday’s reports that SA Football Association (Safa) president and new Nelson Mandela Bay metro mayor Danny Jordaan knew about a transfer of $10m around the time South Africa won the bid to host the 2010 FIFA World Cup.

But, Jordaan reportedly said it was not a bribe.

According to a report on Independent Online, Jordaan said: “I haven’t paid a bribe or taken a bribe from anybody in my life. We don’t know who is mentioned there [in the indictment].

“And I don’t want to assume that I am mentioned.

“They can ask all the executives of Fifa that I have engaged with,” said Jordaan, adding: “During my tenure as CEO at the 2010 World Cup Organising Committee, I was bound by regulations set out in the Schedule of Delegated Authority (Soda).

“Under that authority, I could authorise payments of a maximum of R1 million.”

“How could we have paid a bribe for votes four years after we had won the bid?”

According to IOL, this was the first time South Africa had confirmed paying money to a football association led by former Fifa vice-president Jack Warner, one of the officials arrested and indicted this week by the FBI in the US in connection with alleged corruption.

Jordaan, who was the 2010 LOC chief executive, said that the $10 million was paid to the Confederation of North, Central American and Caribbean Association Football (Concacaf) in 2008 as South Africa’s contribution towards their football development fund, according to the report. Warner was at the time president of Concacaf.
South Africa is alleged to have promised to pay Warner $10m for his support for the 2010 bid. It was not possible to pay the money from SA government funds, so the money was allegedly deducted directly from a $100m payment Fifa made to South Africa to help finance the hosting of the tournament, thereby concealing the alleged bribe.

Mbalula called on all those involved in the bidding and hosting of the 2010 Soccer World Cup to avoid expressing comments that could only play into the hands of those seeking to perpetuate negative stereotypes against South Africa and Africa.

“Whatever the motive of those involved, nothing can detract from the fact that the hosting by South Africa of the 2010 Fifa World Cup, the first on the African continent, remains one of the most beautiful spectacle and successful tournament[s] the world has ever witnessed in Fifa’s history,” the minister said.

“We frown upon any insinuations made in the indictment by the US authorities that suggest that the government of South Africa or any of its citizens have been involved in any wrongdoing without substantiating the allegations, let alone naming the alleged co-conspirators.”

Government refused to allow the reputation of South Africa to be tarnished unduly without affording the country and its citizens an opportunity to respond to any allegations made.

“We view this as an attack on our sovereignty,” he said.

“We wish to reiterate our earlier communicated position that the government of the Republic of South Africa and the local organising committee have not expended funds in the amount of $10m towards bribery of anyone to secure the rights to host the 2010 Fifa World Cup.”

Any inferences drawn from the statements attributed to Jordaan which sought to insinuate that government’s position was contradictory was “not only misleading but mischievous at best”.

“We affirm our position that no public funds have been utilised to pay any bribe or to commit any unlawful acts,” Mbalula said. – News24