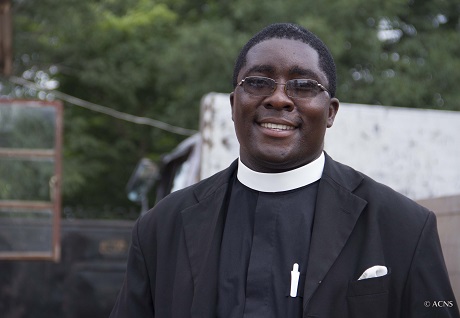 ACNS Africa correspondent Bellah Zulu travelled more than 400km from Zambia’s capital Lusaka to learn more about rural ministry in the country. He spoke with the Revd Fr Edward Zimba, parish priest for Mawanda Anglican Parish, one of the many rural parishes of the Diocese of Eastern Zambia in Petauke district.

He was ordained priest less than a year ago, though he has worked in the area, and been in charge of the parish as a deacon for a long time. Fr Zimba is married to Esther Musonda Zimba and they have one child named John Mphatso Zimba—named after former Diocesan Bishop John Osmers.

He is a self-stipendiary priest since he is also a full time male nurse working for a local clinic, just 50 meters away from the parish house. He considers it a blessing to him, his family and the Church to have a “calling within a calling.”

Q. Tell me more about your parish

Mawanda Anglican Parish is one of the five parishes in the Western Archdeaconry in Petauke District of Zambia. It is located 36 km North of Petauke town, and it is along Chilongozi road leading to Ukwimi Refugees settlement area in Chief Sandwe’s chiefdom.

The parish was established in 1996 just a year after the birth of the diocese. Before it was established, its congregations were under Petauke parish. It consists of fifteen congregations and one preaching point, though the three congregations of Ukwimi are now a sub parish of Mawanda and still under my area service and jurisdiction.

Most of these congregations have modern church buildings unlike in the days of its establishment when they were made of mud and only grass thatched. We have made improvements over the years.

We also have the Anglican Men’s Fellowship, a Lay Ministers’ Association, and the youth ministry. Each congregation in my parish has a youth choir group though not all youths belong to choir groups.

Q. What has been your experience of being a parish priest for this area?

My time at the parish has both good and bad memories. The very first day I visited my farthest congregation, about 36 km away from the parish house, using a motorbike, I was involved in a road accident and sustained a knee injury.

But then nothing can explain the joy we felt when God blessed my wife and I with our first child, John Mphatso whom we named after our first diocesan Bishop, Bishop John Osmers, who has been like a father to me.

This excited not only me, but our parishioners as well who saw our son as a precious gift bringing them memories of their time with Bishop John during his tenure of office as Diocesan Bishop of Eastern Zambia.

God has been good to us and miracles continue to happen in our parish. For instance, recently one of our parishioners, Jennipher Makwenda for the first time got back her feet through prayers and pastoral duties on her after having been bound to a wheelchair for several years.

To crown it all, we have for the first time managed to connect the parish house to the national hydro-power grid.

Q. It seems Illiteracy and HIV/AIDS are a major challenge in your parish. What measures have you put in place to address these problems?

Mawanda parish has some social groups such as gender and development, gender and governance, and HIV/AIDS support groups and a new Early Childhood Development programme dealing with children’s education and health. Actually the early childhood programme has just been officially launched and had the major support of the government and other organisations such as UNICEF.

It’s true that most of the people in our area are poor and semi-literate. But still, most of them are engaged in small-scale subsistence farming through growing maize, cotton and groundnuts. This is a major source of their income.

We also enjoy a good relationship with other parishes. For instance, we are linked to St Mary’s Bridgwater in Somerset in the diocese of Bath and Wells. The parish has enjoyed the friendship with St Mary’s for a long time now starting in the time of my predecessors. There are many things that I can say about St Mary’s and the Link Correspondent Mrs Kathryn Philpott and her husband Richard who have helped the link to come this far.

Q. What are some of the major challenges you have faced as a rural parish?

We have had many challenges as a rural parish. One of them is the weak financial muscle of the parish. Serving God among peasant farmers in this part of the world means having monies only when they harvest their crops, which is once in a year. Despite having seasonal finances, we have been able to pull through to another year through proper planning and setting priorities.

We have planned to build a house at the parish centre with a view to renting it our to civil servants so that we are able to have at least a monthly income. How I wish we were able to buy hammer mills for use as one of our income generating ventures.

The other challenge is visitation to other congregations during rainy season. This is a challenge in that roads become impassable. This means that affected congregations are visited more during dry season, especially that I also have to oversee another local parish with 10 congregations. I only depend on a resident Evangelist.

I have also been facing challenges with the youth ministry. From the time I took over the running of the parish from my predecessor, we have been trying to re-organise the youths. Despite our efforts, it has been hard due to other factors like lack of transport and finance to reach out to the young people.

At the moment the only mode of transport in the parish is a motorbike, which is for the priest. As a parish, we hope and believe that one day we shall be out of this difficult situation. The moment the youths are on board, things will be unfolding by themselves as the youths are an important instrument in every form of development.

Q. How has Anglicanism flourished in this area? I noticed on my way here that there are also a lot of other religions such as Islam in this area.

In my catchment area, there are many denominations and among them is the Roman Catholic, our sister Church. However, as a traditional Church, Anglicanism has flourished more than other faiths around.

This is evidenced by the increase in numbers of candidates coming in for baptism and confirmations. It is more of family tree; members here are mostly introduced to Anglicanism through relatives if not by marriage. Moreover, the youth are shifting from Anglo-Catholic traditions to Evangelicals.