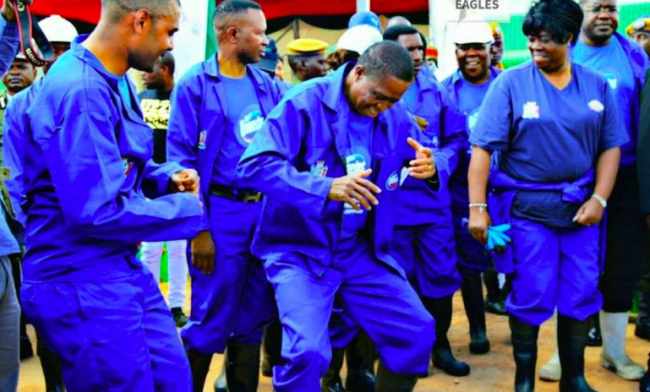 PRESIDENT Edgar Lungu has asked his team to step up their game and see to the fulfilment of their campaign promises in order for him to successfully finish his tenure from 2021-2026.

Addressing a rally in Kitwe yesterday President Lungu who was in the city to check on developmental projects urged his Members of Parliament, Mayor and the councilors to help him ensure that they deliver campaign promises made.

He said only the successful delivery of these promises would guarantee them rightful re-election in 2021 noting that he wants his end of 2026 to be resounding.

“We can develop Zambia , from 2011 Zambians can see what we have done.. This was the vision of our President Michael Chilufya Sata, he had a vision for development and that of a bigger all-inclusive party,” President Lungu said.

The head of state who was standing on a road in Ghanatone a part of Kitwe that has not seen bitumen roads for over 22 years boasted that people were joining the Patriotic Front because it was delivering unlike what ‘abalufumo’ is saying.

He said the party had no money to waste to capture defectors as such resources would rather be channeled to positive works.

“We do not have money to waste, we are not buying defectors. People are joining us because the party is one that is attractive and is working,” he said.

And President Lungu said PF would remain an all inclusive party taking development to all corners of Zambia.

He urged his party members to adopt democratic tendencies that call for election of individuals at all levels based on their work ethic and not economic stature, tribe or even colour.