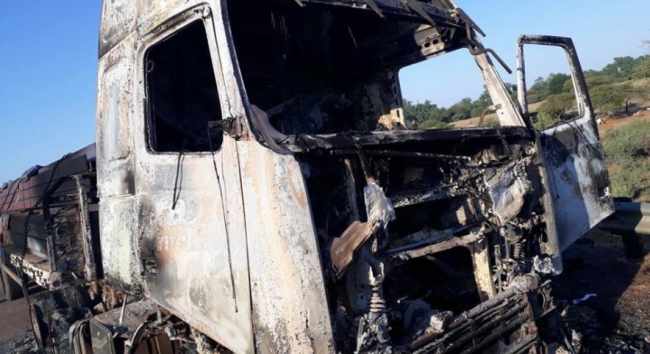 Three (3) Zambian Truck drivers have been petrol-bombed and their trucks burnt to ashes by violent protesters in Groblersbrug, Limpompo Province, South Africa in two separate incidences that happened on Wednesday night.

And the Zambian High Commission in Pretoria, South Africa has appealed to the South African government through the Department of International Relations and Co-orporation (DIRCO) to urgently help safe guard the safety of Zambian truckers involved in the transportation of goods between the two countries.

One of the drivers whose identity is yet to be confirmed with his employers, an identified Zambian registered trucking company sustained life threatening injuries and has been admitted to a nearby hospital while the other one identified as Vincent Yavwa, 54, sustained minor burns and has since been discharged from hospital.

Mr. Yavwa, holder of passport number ZN246720, a driver at Southgate Investments Limited was attacked along the R 572 road at around 18 hours South African time by the violent protesters en route to Groblersbrug.

According to the information made available to the Zambian Mission in Pretoria, truck registration number BAH 1795ZM with interlink trailers belonging to Southgate was set alight by petrol bombs and burnt to ashes including the cargo it was to deliver.

Last week about 30 foreign trucks including three (3) Zambian trucks were burnt to ashes on the N3 Toll Route near Mooi River in KwaZulu-Natal bringing the total number of Zambian trucks burnt in various parts of that country to six.

In a Note Verbal written to the Department of International Relations and Cooperation DIRCO, Zambia’s High Commissioner to South Africa His Excellency Mr. Emmanuel Mwamba has called on the South African government to put in place urgent measures that would guarantee the safety of Zambian truckers.

He said that the unfortunate development had the potential to disrupt international trade and halt the movement of goods and services between the two countries as there were many South African trucks transporting goods to Zambia and Vice versa.

Mr. Mwamba noted that the attacks were unfortunate and the Mission will continue to engage South African authorities to ensure that human life and property were protected.

He noted that he was so far encouraged by the immediate response by government to arrest those allegedly involved in burning to ashes of trucks.

Mr. Mwamba has since called for calm among truck drivers and the Truckers Association of Zambia as the Mission had engaged the South African government to help put measures in place to safe guard the safety of the truckers and their goods.
Mrs Naomi Nyawali
First Secretary Press and Public Relations.
Zambia’s High Commission, South Africa.