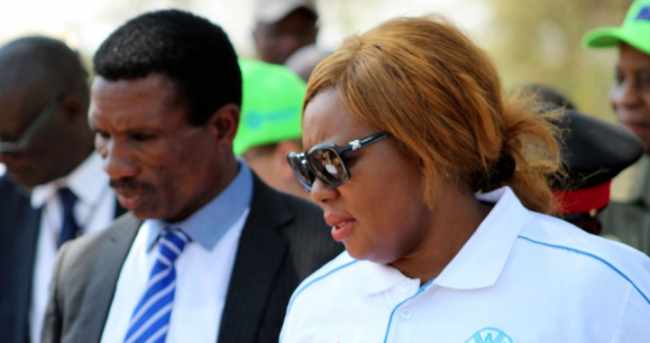 PRESS STATEMENT BY THE MINISTER OF INFORMATION AND BROADCASTING SERVICES AND CHIEF GOVERNMENT SPOKESPERSON HON. DORA SILIYA ON THE DECISIONS MADE BY CABINET AT THE 3RD CABINET MEETING HELD AT STATE HOUSE ON MONDAY, 19TH FEBRUARY, 2018

At the 3rd Cabinet Meeting held on Monday, 19th February, 2018, at State House, which lasted about 8 hours from 10:15 hours, Cabinet discussed six (6) substantive Agenda Items. The following were the decisions made:

1. Engineering Design, Rehabilitation, Upgrading and Construction of selected urban roads in the City and Province of Lusaka, Zambia Project

Cabinet approved the financing of selected roads in the Lusaka City (commonly called the Lusaka 400). An amount of US$ 204,940,174.80 has, therefore, been approved by Cabinet to support the Engineering Design, Rehabilitation, Upgrading and Construction of selected urban roads in the City and Province of Lusaka, Zambia Project.

His Excellency the President and his Cabinet have agreed to continue with infrastructure projects country-wide as the Government is aware that it is through such projects that economic progress could be achieved. Therefore, a total of US$ 241,106,088.00 of which 85% (US $204,940,174.80) will be provided by the Export-Import Bank of China while the 15% (US$ 36,165,914) will be provided by the Industrial Commercial Bank of China.

The general scope includes periodic maintenance, rehabilitation (gravel to paved and single lanes to double lanes) and new construction of approximately 400 Km roads, construction of 1 grade separated junction, construction of 90 Km of walkways and re-engineering of 10 junctions in the City of Lusaka project. With this project, the face of Lusaka City is expected to change completely as has been the case with key roads such as Chilumbulu; Burma; Nationalist; the Matero/Lilanda; Old Mumbwa Road and many others in townships. Cabinet further, emphasised the need for all road projects under this project to include drainages and street lighting.

During the same Meeting, Cabinet approved the financing of roads on the Copperbelt Province. For this project, Cabinet approved a total amount of US$ 197,391,777.85 to finance the implementation of the Engineering Design, Rehabilitation, Upgrading and Construction of approximately 152 km of selected township roads in Kitwe, Chingola and Mufulira in Copperbelt Province dubbed, the Lot 1 Project. The project also includes walkways, street lighting and traffic lights at selected junctions. Like the L400, this project will also involve the putting up of drainages.

A total of US$ 232,225,621.00 of which 85% (US$ 197,391,777.85.) will be provided by the Export-Import Bank of China while the 15% (US$ 33,833,843.15) will be sourced by Government to ensure a complete implementation of this important project for the Copperbelt Province. Government believes that improving the road network on the Copperbelt Province will facilitate greater economic activity.

This is an important project for the Copperbelt as it will result in the improvement of roads, decongestion of the current road network and improved accessibility to more areas, spurring further investment, economic activities, general development and improved living standards for the people on the Copperbelt.

The Government of the Republic of Zambia has identified the Electricity Service Access Project as a priority project with the main objective of increasing the country’s electricity access in the Zambia’s targeted rural areas.

Government is aware that with improved accessibility of electricity, especially in rural areas, this will enhance establishment of industries in these areas, thereby, increase economic activity.

4. Appointment to the Board of the National Prosecution Authority.

Cabinet approved the appointment of two Government officials on the National Prosecution Authority Board. There has been a vacancy in the position of Vice-Chairperson of the Board for the Authority and in the position of a Member appointed as a representative of the Ministry responsible for labour due to staff movements within the Ministries responsible for Justice and Labour.

5. Medical Stores Bill, 2018.
Cabinet approved in principle to the introduction of a Bill in Parliament that will provide for the conversion of Medical Stores Limited into a Statutory Government Agency.

Currently, Medical Stores Limited is being supervised by the Industrial Development Corporation (IDC) as majority shareholder (98%) and Ministry of Health holds 2% of the shares. Continued placement of Medical Stores Limited under the IDC implies that it will be considered as a profit-oriented entity which is contrary to its mandate. Furthermore, MSL is a grant-aided institution with all its income coming by way of a grant from the Treasury and from Cooperating Partners.

Since its creation in 1976, Medical Stores Limited has been operating under the Companies Act and has endeavoured to provide the necessary medical supplies.

Further, Cabinet discussed matters pertaining to HIV and AIDS. Cabinet approved in principle, to the introduction of a Bill in Parliament to repeal and replace the National HIV/AIDS/STI/TB Council Act, No. 10 of 2002 in order to:

(b) enhance public health protection through adoption of best practices in the prevention and management of HIV and AIDS, STI and TB; and

(c) right size the composition of the National HIV/AIDS/STI/TB Council in order to provide for a lean but effective governing body.

Economic Affairs: Update on the Performance of the Economy and the 2018 Outlook.

During the Meeting, Cabinet took note of the information in the brief by the Minister of Finance on the performance of the economy. His Excellency the President and his Cabinet agreed in the past Meetings that it was important that the Minister of Finance keeps updating Cabinet on the economic outlook in order to, among other things, check the progress the Patriotic Front Government was making in the implementation of policies and where possible, which remedial measures should be taken in order to continue to serve the people of Zambia better as promised.

The Minister of Finance in her brief highlighted that:

(a) GDP growth continued on a positive trajectory, though at a slower rate than earlier projected;
(b) inflation was contained within the projected band of 6%-8% at 6.1%;
(c) relative stability was achieved in the exchange of the Kwacha against major trading currencies;
(d) the preliminary budget deficit at 6.1% was contained below target of 7%;
(e) the external sector improved as the current account deficit narrowed to US$760.3 million from US$1.037 billion in 2016; and

The Meeting also expressed the need for Government to quickly rehabilitate economic roads such as the Chingola / Solwezi; Kafue / Mazabuka and Lusaka / Mongu roads which were currently in bad state.

In concluding the Meeting, and on a sad note, His Excellency the President and Cabinet regretted the loss of lives of 6 children who drowned in Central Province. Cabinet wished all the bereaved families heartfelt condolences and God’s help and guidance during this mourning period.