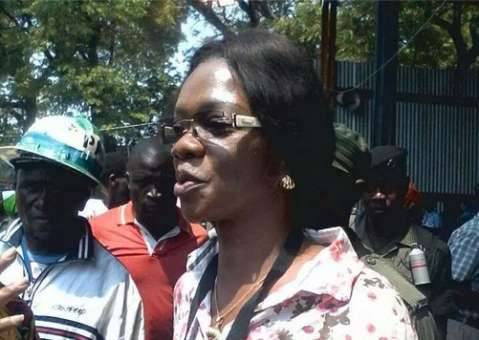 CHONGWE Member of Parliament (MP) Sylvia Masebo was yesterday re-arrested on fresh charges of unlawful assembly shortly after the Lusaka Magistrate’s Court discharged her on an offence of conducting an illegal procession and escaping from lawful custody.

Ms Masebo was rearrested immediately after leaving the courtroom.
She was asked to accompany police officers who were waiting outside the courtroom to Woodlands Police Station where fresh charges of unlawful assembly were slapped on her.
Ms Masebo was rearrested along with Benson Mbewe, Joyce Sakala, Kenan Kabunda and Emmanuel Chilembo.
The four have been released on police bond and they will appear in court today.
Earlier, Lusaka magistrate Lameck Mwale discharged Masebo and her co-accused on an offence of conducting an unlawful procession and escaping from lawful custody after the State entered a nolle prosequi.
Mr Mwale said in a ruling delivered yesterday that the offence under which Masebo and the four were accused of does not exist as section 7 (a) of the Public Order Act was repealed and replaced with section (six) of Public Order Amendment Act number 1 of 1996 .
Masebo, 52, a politician, Mbewe, 37, a tailor, Sakala, 50, unemployed, and Kabunda, 47, and Chilembo, 37, all businessmen of Lusaka, were charged with unauthorised procession and escaping from lawful custody contrary to section 7 (a) of the Public Order Act.
He said the application asking the court to quash the indictment could not be allowed in the case of a nolle prosequi entered by the Director of Public Prosecutions (DPP) because the court has no power to refuse the exercise of that power by the DPP.
“It is abundantly clear, this court is not clothed with no power to refuse the exercise of power by the DPP. The subordinate court is clearly a wrong forum to challenge the power of the DPP as this is only done by the High Court which has jurisdiction in such a case,” Mr Mwale said.
He said he could not quash the indictment but allow the nolle prosequi and that the defence should have raised the nullity of the offence at the time Masebo and her co-accused appeared for plea.
He noted that the defence had instead requested him to refer the matter to the High Court for determination of constitutional issues to which the state did not respond but later came back to the court and entered a nolle prosequi.
“If prayer was made by the defence before the nolle prosequi was made, the indictment would have been quashed. In as far as the validity of this case is concerned, I am of the considered view this court is incompetent to declare proceedings a nullity and quash the indictment in the face of a nolle prosequi entered regardless of the reasons,” Mr Mwale said.
He discontinued the case.
Some United Party for National Development MPs attended the court session.