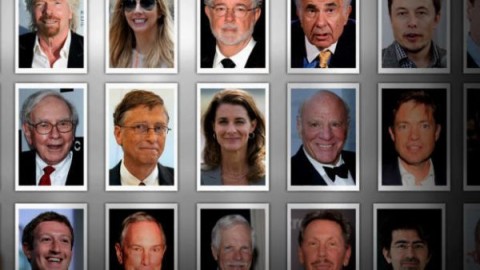 Membership comes with just two requirements: You must be worth at least a billion dollars and be willing to give half of that away.

The following script is from “The Giving Pledge” which aired on Nov. 17, 2013. The correspondent is Charlie Rose. Denise Schrier Cetta, producer.

Today, the wealthiest 400 Americans are worth over $2 trillion. Together, it’s been reported they own as much wealth as the bottom half of American households combined.

While resentment towards the super rich grows, there may be a silver lining taking shape. It turns out a lot of those rich people are giving staggering sums of money away, in what is being called a golden age of philanthropy.

And this surge in generosity is not by accident. Much of it is the result of an ambitious and targeted campaign called “The Giving Pledge.” It was started by an influential trio: Bill and Melinda Gates and Warren Buffett. We waited for the opportunity to get them together to learn more about their new club for billionaires. Membership comes with just two requirements: be worth at least a billion dollars and be willing to give half of that away.

Charlie Rose: Is it necessary to join the Giving Pledge that you promise 50 percent of your net worth?

Melinda Gates: Yes. In your lifetime or in your will.

Charlie Rose: Or in your will?

Charlie Rose: Are people shocked by that?

Warren Buffett: I don’t think so.

Melinda Gates: We’re asking them to be bold. We’re asking them to step out and to do something big. But a lot of them were already on their way there and just hadn’t put a numeric number behind it. And I think now also the Giving Pledge has gotten going, people know that’s the expectation.

Charlie Rose: Some may say I’m happy to give much more than 50.

Warren Buffett: Oh, most of them. Most. My guess is that a very significant percentage of our members, I mean, way over half are going to give a lot more than half.

That’s certainly true of the founders. The Gates have already committed to giving 95 percent of their wealth away. Warren Buffett – 99 percent.

They say that kind of extreme giving is needed because the rich have been getting so much richer. Tech innovations and rising global markets have produced vast fortunes not seen since the Industrial Revolution.

So what does Warren Buffett say to convince today’s billionaires to give their fortunes away?

Warren Buffett: Incremental wealth, adding to the wealth they have now has no real utility to them. But that wealth has incredible utility to other people. It can educate children, it can vaccinate children. It can do all kinds of things.

Charlie Rose: There are others, and people that I know, say, “I want to give it to my children. That’s what I want to do.” What’s wrong with that?

Warren Buffett: I don’t really think that, as a society, we want to confer blessings on generation after generation who contribute nothing to society, simply because somebody in the far distant past happened to amass a great sum of wealth.

So far 115 billionaires have bought Buffett’s argument and signed the Giving Pledge. Ages range from 27 to 98. Some inherited wealth, but most are self-made. Their businesses range from technology and social media… to pizza, hair care and home improvement. Combined pledges so far – over a half a trillion dollars.

Charlie Rose: What conditions are there? I mean, can they say, “Yes, I’m with you. I’m here. But I want to give it to this institution or that institution.”

Warren Buffett: We don’t care what institution they give it to.

Bill Gates: Yeah, in fact, we’re not endorsing any flavor of philanthropy. We do think we’re all gonna be smarter and do it better learning from each other. But there is no pooling of money. We celebrate the diversity of philanthropy.

Billionaires can be shy when it comes to talking about their money. But Warren Buffett helped convince seven who have signed the pledge to sit down with 60 Minutes.

Charlie Rose: When did you first hear of the Giving Pledge?

Jean Case: Melinda called and talked to us. But we had the benefit of knowing Bill and Melinda for a long time, going back to our technology roots.

Steve Case: We competed against them for many years.

Jean Case: We did.

Charlie Rose: You wanted to be on their side.

Steve Case: Yeah, yeah, we wanted to be on the, aligned.

They’ve all signed the same pledge, and they bring the same brashness to their philanthropic ambition that helped them build financial empires.