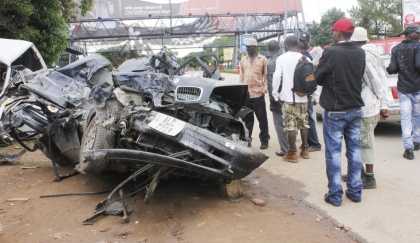 Mr Mwandama, 36, was driving a BMW registration number ALC 7719 in the early hours when the accident happened on the Great East Road near the Agricultural Showgrounds.
His car, was also hit by a Toyota Canter he had overtaken, causing extensive damage. Eyewitnesses said a passenger in the Canter died.
Mr Mwandama was an accountant in the Ministry of Finance.
Daily Mail managing director Isaac Chipampe expressed shock at the death of Mr Mwandama.
“Our thoughts are with Caroline and the Mwandama family at the moment,” Mr Chipampe said.
The funeral is at house number 784 New Avondale in Lusaka.
And a seven-year-old girl of Lusaka died on the spot after being hit by a car on Chifundo Road in Chawama.
The girl was hit by a Toyota Hiace minibus driven by 39-year-old Peter Phiri of the same area.