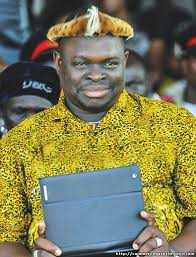 Chief Madzimawe has rescued a 15-Year-old Girl from marriage. The 15-year-old who is in grade six was married to a 19-year-old man.

This came to light when Community Development Deputy Minister Obious Chisala paid a call on Chief Madzimawe in Chipata.

Chief Madzimawe complained that despite his efforts to fight early marriages, parents have continued marrying off their children at a tender age.

And Mr. Chisala praised the Chief for his efforts in fighting early marriages.