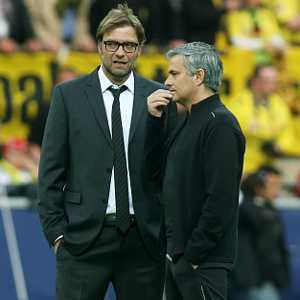 Jose Mourinho is optimistic that his Chelsea side can turn their season around ahead of the Barclays Premier League champions’ meeting with Liverpool this weekend.
The Blues have picked up 13 points from the first 10 matches of their title defence and suffered a midweek penalty shoot-out defeat to Stoke City in the League Cup, a competition they won last season.
Chelsea, who sit 15th in the BPL, have won one of their last seven matches in all competitions but Mourinho feels his team can take heart from their performance at the Britannia Stadium.
“It’s difficult – but it’s more difficult when you play very badly and lose, than playing well and losing,” the former Real Madrid boss said.
“They go home with sadness but with a positive feeling. How can [Eden] Hazard, or Oscar, or [John-Obi] Mikel, or John Terry, to say some names – I could say everyone – how can they go home with a lack of confidence?
“They played well, they didn’t make many mistakes. They participated in the game a lot.”
Liverpool manager Jurgen Klopp heads into Saturday’s match riding the crest of the wave of positivity surrounding his appointment at Anfield.

Klopp oversaw his first win in charge of Liverpool on Wednesday, a 1-0 League Cup victory over AFC Bournemouth, following three successive draws since replacing Brendan Rodgers at Anfield.
And the German was thrilled to finally get off the mark.
“I feel much better than after a draw,” Klopp said. “But I don’t think the other games were so much worse than today – of course, the result is the biggest difference and we did well tonight.
“I saw minute by minute we were better in the game, we closed the spaces better and the whole 90 minutes we played football and created our chances.
“We didn’t have any real experience together, so I’m really satisfied – the boys did really well.”
Christian Benteke missed the AFC Bournemouth tie with a knee problem, but Klopp expects the Belgian – who came off the bench to score the opener in Liverpool’s 1-1 draw with Southampton last week – to be fit for Saturday.
Daniel Sturridge continues to struggle with a knee injury of his own and remains doubtful, but James Milner is available after suspension.
Mourinho also faces a headache up front, with Diego Costa suffering a rib injury at Stoke, leaving the Spain frontman’s status for the weekend in question.
Branislav Ivanovic (hamstring) is likely to miss out for Chelsea, while Pedro (knock) is also a doubt.
Chelsea (from): Amelia, Begovic, Blackman, Azpilicueta, Cahill, Djilobodji, Ivanovic, Rahman, Terry, Zouma, Fabregas, Hazard, Loftus-Cheek, Matic, Mikel, Oscar, Ramires, Traore, Willian, Costa, Falcao, Kenedy, Pedro, Remy.
Liverpool (from): Bogdan, Mignolet, Clyne, Jose Enrique, Lovren, Moreno, Sakho, Skrtel, Allen, Can, Coutinho, Ibe, Lallana, Lucas, Milner, Teixeira, Benteke, Firmino, Origi, Sturridge.
Match Appointments
Referee: Mark Clattenburg Assistants: S Child, S Beck Fourth Official: L Mason
Match Facts
– Chelsea are unbeaten in their last six Barclays Premier League meetings with Liverpool, winning three and drawing three.
– The Blues have won one of their last five home league matches with Liverpool (D2 L2), although are they unbeaten in the last three (W1 D2).
– Chelsea have lost two of their last four BPL home matches after going unbeaten in the previous 21 (W15 D6).
– Liverpool are unbeaten in their last five league outings (W1 D4), their longest unbeaten spell since March (13 matches unbeaten).
– Jose Mourinho has lost six of his last 12 BPL matches; immediately before that run, he had lost six in 64 in the competition.
– Liverpool are without a win on their last five league trips to London, losing two and drawing the last three.
– Mourinho has only one of his previous four meetings with Jurgen Klopp, all in the 2012/13 Uefa Champions League (D1 L2), including the semifinal where Borussia Dortmund beat Real Madrid 4-3 on aggregate.
Premierleague.com