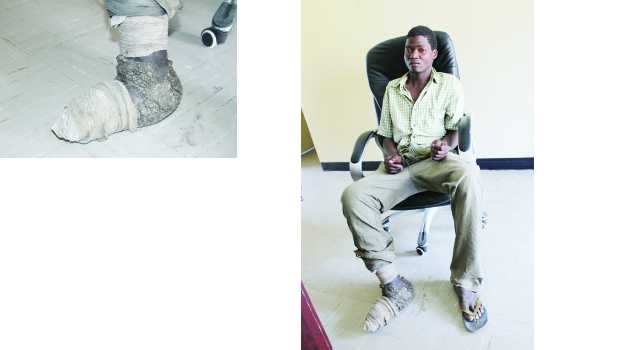 A NINETEEN-YEAR-OLD boy of Choma who has an extreme swelling on his right leg suspected to be elephantiasis has appealed for financial support from well-wishers to treat the disorder.

Elephantiasis is a parasitic infection that causes extreme swelling in the arms or legs. It is typically characterised by a thickening of the skin and subcutaneous tissue that leads to enlarged and swollen limbs.
Given Phiri, an orphan from Zambia Township, started experiencing a snag on his leg while in grade eight at Nkalamabwe Primary School in Chongwe before his leg started swelling.

In a walk-in interview with the Times of Zambia in Choma yesterday, Phiri said at first he had dreamt that he had been injured while playing football before his leg started itching.
He went to the University Teaching Hospital (UTH) where doctors told him the leg had a fungal infection.

“Even now it is swelling with a thickening skin. I have difficulties to walk,” said Phiri amid sobs.
The boy, whose father and mother died in 2007 and 2009, respectively, dropped out of school while in grade eight due to the complication on his leg.

He was unable to go for specialist treatment apart from UTH where the Bukata Women Empowerment organisation took him last year.
Phiri was unable to buy the recommended drugs with other medical utensils and disinfect.