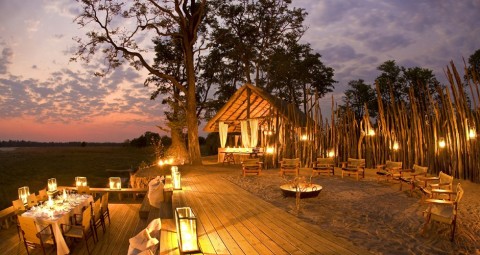 “Good morning.” The whispered wake-up call from outside my chalet brought back childhood memories of my grandmother rousing me on school days. The mosquito netting around my bed spoke of a different time and place, though. Zambia. Mfuwe Lodge to be exact.

Mornings at The Bushcamp Company camps begin at 5:45 a.m.. Guests convene around a wood fire, nodding over cups of chicory-laced Zambian coffee, waiting for the caffeine to kick in. Once it does, continental breakfast lures. No boxed pastries here. Fresh baked bread is toasted over a small grate, hot porridge waits to warm bellies, muffins still hot from the oven tempt in a basket.

As will occur every day, there’s the urge to linger over breakfast, when our guide, Manda Chisanga alerts, “Time to go!” As if the caffeine hits at just that moment, senses tune in. Adventure is guaranteed in the day ahead. Are we beginning with a walking tour? Climbing into a Land Rover to tackle rough terrain? “Grab your bags, we’re heading to the airport.” What?! Hadn’t we just landed the night before after almost two days of flying? The thought of seat-belting in yet again — not appealing.

The hint of a smile was noted on the face of Andy Hogg, owner of The Bushcamp Company. This did not dissipate grumbles.

Back we drove to Mfuwe International Airport, where we climbed into an airplane with exactly enough seats for our party of five. “I’m taking you to Bilimungwe, your next camp,” the pilot notified. “Andy thought you’d like to see South Luangwa National Park from above instead of taking the three-hour drive.” The reason behind Andy’s smile was revealed. And now, smiles were breaking across our faces as we took in a birds-eye view of the 9,050 square kilometers of the park.

All too soon, the flight ended with a bumpy landing in a field. Upon disembarking, Manda pointed to the plane’s tire, now flat. The pilot would be accompanying us to Bilimungwe. There were no mechanics to come to the rescue. This was the bush, after all. The true bush. We were now in the thick of it. Speaking to this was the fact that we passed no villagers or vehicles en route to Bilimungwe. Instead, the field leading to the camp’s entrance was filled with impalas, warthogs and baboons. An urge to hop from the vehicle and participate in what was surely nature’s recess came over me. Alas, we continued over a crest and under a giant mahogany tree, where Bilimungwe’s staff waited to greet us.

Camp manager Tom Mazzarisi ushered us to cushy chairs, where we were hydrated with elixirs from the bar. A former park ranger from Yellowstone, Tom excitedly gave Manda a report of the wildlife that had been spotted in the past 24 hours. My eyes remained trained on the field we’d just passed through. The baboons were still inviting for a game of tag. The sighs of my fellow travelers turned my attention in the opposite direction. There, in the watering hole that serves as the heart of the camp, nine elephants were taking an afternoon dip.

Manda let us marvel in our surrounds for a bit before announcing, “Let’s walk.” Tom tugged at the fleece he was wearing. “This brings lion energy,” he assured. Our questioning looks were followed by a story about a male lion grabbing the fleece from Tom’s hand and running away with it into the bush. A guide recovered the fleece two days later. Said fleece, which now bore tooth holes, was said to hold lion mojo.

Our first walking safari commenced. Manda instructed us to tread in a single line so as not to frighten/challenge any wildlife we might happen upon. Leading the way was a gun-toting guide name Priest, followed by Manda. Bringing up the rear was a third guide, whom I will call Angel, as he helped my airplane swollen, chronically injured knees traverse cliffs and uneven mud fields cratered by elephants. Tracks in the dirt were pondered. Various types of dung inspected. The calls of birds deciphered. All these clues from nature determined a course to the Luangwa River. Waiting just across the shore were a pair of giraffes.

We encountered other creatures on our walk, including a herd of elephants. Our silent march quickly retreated in the opposite direction. Manda’s whispered wisdom, “You’re aware of the danger that’s behind you. Keep your eyes open for what lays ahead.”

Soon, we stumbled into an open field. Waiting there was a welcome sight – sundowners. This nightly occurrence is an observance of the sunset complete with cocktails. We settled into chairs that the Bilimungwe staff had set out for just this purpose. At the ready for a night safari was a Land Rover, which whisked us off into the twilight.

As night fell, there was the now familiar glittering of eyes in the dark — a group of impala here, a genet there. A call on the radio informed, “Manda, a group of four lionesses are at the camp entrance.” The Land Rover pulled a 360 and headed back towards Bilimungwe. There, in the dark, two lionesses and two teenage lions were napping directly in the driveway. We sat in the truck and watched for a while, awestruck by their magnificence.

Unable to enter camp, we headed to a nearby field where a barbecue was being prepared. Tom was buzzing with stories about the lions’ arrival. The romance of the starlit barbecue was enchanting, but a thought kept nagging: Were the lions still back at camp?

Finally, we piled back into the Land Rover and headed home. Indeed, the lions remained in camp, though they’d found a cozier spot to sleep, just outside of Tom’s chalet. Were they waiting for the return of that polar fleece?

It’s possible hours passed as we watched the lions slumber. I imagine our wonder at observing them was much like that of the parents of newborns watching their children sip each new breath. It was a moment that required being frozen in time.

Alas, Manda broke the spell. “I’ll have to drive each of you to your chalet,” he said, a break from the normal on foot escort. “What about Tom? Can he slip past the lions?” we asked, the gentle creatures looking too lost in dreams to note footsteps. “They would grab him in an instant,” Manda said, bringing back nature’s reality.

Tucked in my own bed, I thought of the four lions, just a few feet away. At some point during the night, I imagined them under my own chalet, having been drawn by my magnetic wishes for communal dreaming. Upon waking in the morning, I stepped outside to see something I recognized from Manda’s schooling – lion tracks, leading directly under my floorboards.