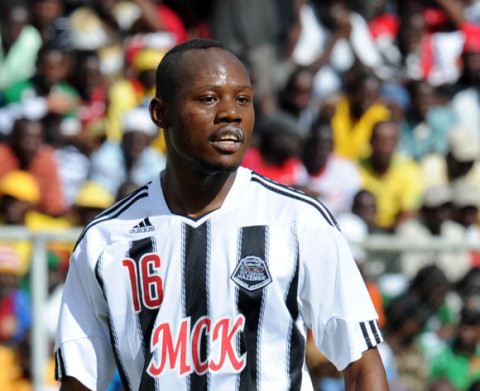 Tweet
DEFENDER Stoppila Sunzu has been declared ready for Zambia’s international friendly match against Egypt tomorrow and striker Emmanuel Mayuka has been recalled to the squad.

And Chipolopolo coach Patrice Beaumelle has said he was expecting a good result over the seven-time African champions.
Sunzu, who was reportedly injured during a TP Mazembe league match against Lupopo, was part of yesterday training at Nkoloma Stadium in Lusaka together with club-mate Nathan Sinkala.
Noah Chivuta, Emmanuel Mbola and Rodger Kola were also part of yesterday’s training, while Kennedy Mweene and Christopher Katongo are scheduled to fly directly from their respective bases.
Striker Collins Mbesuma is already in Cairo where he remained after his team, Orlando Pirates’ CAF Champions League defeat to Al Ahly.
Chipolopolo team doctor, Joseph Kabungo said in an interview that Sunzu was fit and ready to face Egypt and so was Sinkala and Kola, adding that the team was enjoying a clean bill of health prior to their departure for Cairo last night aboard an Emirates flight.
Kabungo also expressed surprise at reports that Sunzu sustained a head injury.
And Beaumelle said time for Zambia to win games had come, adding that time for near misses was long gone, starting with the Egypt match which he said would be the last game on the FIFA calendar this year.
Beaumelle said the team had played some tough matches against Brazil and Jordan, losing both despite playing well but that, his aim was not really to win, but that he wanted the team to reach a point where results should start coming their way.
“Realistically, I did not think we can beat Brazil but we played well though you could see the level of difference between the two sides. That is what we are working at. We need to close that gap. We took a team of local players to face Jordan and we lost, that is not an excuse but we wanted to see how the players can perform,” he said.
Beaumelle said he was confident that this well-blended side comprising of foreign and locally based players would bring home a good result.
He was happy to have Sunzu and Sinkala in the team but emphasised that there was no way he was going to drop players that impressed during the Brazil and Jordan friendly matches just to accommodate some players.
He also challenged striker Kola to prove his worth being in the Chipolopolo especially with regular strikers Jacob Mulenga and James Chamanga out of the team due to injury.
On Mayuka, who was left out of the team earlier but scored his first goal for FC Sochaux, Beaumelle said he had been in constant communication with coach, Herve Renard to get updates on the player that was injured two weeks ago.
Hichani Himonde was due to arrive in the afternoon while Mayuka and Chisamba Lungu would fly directly into Cairo from their European bases.
Meanwhile, Beaumelle said he was confident that the Egyptian authorities have put in place security measures for the team during its stay in that country following some reports of unrest in that country.
The full squad: Mweene, Toaster Nsabata, Joshua Titima, Jimmy Chisenga, Kabaso Chongo, Sunzu, Himonde, Christopher Munthali, Bronson Chama, Mbola, Rodrick Kabwe, Chivuta, Sinkala, Lungu, Felix Katongo, Christopher Katongo, Fwayo Tembo, Julius Situmbeko, Bruce Musakanya, Kola, Mbesuma and Mayuka.