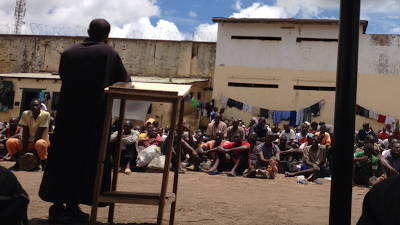 Tweet
A PRISONER, who was recently jailed by Chipata magistrate Philip Mpundu to five years imprisonment with hard labour for breaking into a bank and stealing more than K400,000, has escaped from Chipata Prison.

The prisoner identified as James Bwalya escaped, while he was working with others under the supervision of a prisoner warder.
Bwalya was sentenced to five years imprisonment after being found guilty of breaking and stealing money from Stanbic Bank, Chipata Branch amounting to more than K418,609.
Eastern Province police chief Grace Chipalila and Prisons Service public relations officer Doreen Ngoma confirmed the prison break in separate interviews yesterday.
Ms Chipalila and Ms Ngoma said the prisoner escaped last week on Tuesday morning when he excused himself at a work place.
She said a manhunt had been launched to capture the escapee.
“The information we have as a police is that this man, whom I will be able to tell you his full identities tomorrow (today) as he was working with other prisoners, he excused himself and he never returned until today (Sunday). We shall capture him,” she said.
Ms Ngoma, however, said Bwalya had escaped from prison, while serving five years for breaking into a building, thereby committing a felony.
She said the prisoner escaped when he was working with other prisoners who were in groups.
In another development, 11 passengers have been injured when a Petauke-bound mini-bus they were travelling in overturned along the Great East Road.
Ms Chipalila and Sinda District Commissioner (DC) Caroline Mwanza said the accident happened on Saturday at Kalima village around 14:30 hours when the driver, who was speeding careered off the tarmac.
The police chief said five people were seriously injured, while others sustained some bruises on their bodies.
Ms Chipalila said seven passengers were still admitted to St Francis Mission Hospital in Katete District.
She described the condition of those admitted to the hospital as stable and out of danger, saying others were treated and discharged.