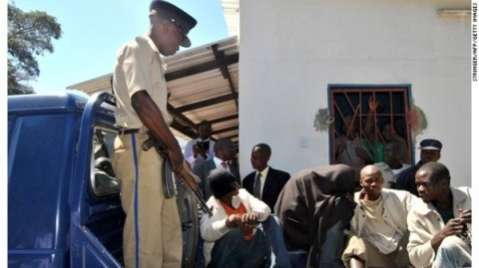 The two are alleged to have committed the offence in Kapiri Mposhi kast month.

And Magistrate Mbuzi has adjourned the case to 5 June, 2013 for determination of constitutional issues raised by the defense.

This is in the case in which James Mwape, a bricklayer and Philip Mubiana a hair dresser both aged 21 and residents of Ndeke and Soweto compounds respectively in Kapiri Mposhi are facing four counts of engaging in homosexuality.

In the first count Philip Mubiana is charged with committing an unnatural offence contrary to section 155 (c) of the penal code chapter 87 of the laws of Zambia as read with amended Act number 15 of 2005.

Particulars of the offence are that Mubiana, on unknown dates but between 11 and 25 April 2013 in Kapiri Mposhi in central province did permit a male person, James Mwape to have canal knowledge of him against the order of nature.

In the second count James Mwape is charged with committing unnatural offences contrary to section 155 (c) of the penal code chapter 87 of the laws of Zambia as read with amended Act number 15 of 2005.

Particulars of the offence are that Mwape, on dates unknown did permit a male person Philip Mubiana to have canal knowledge of him against the order of nature.

In the third count James Mwape is charged with committing an unnatural offence contrary to section 155 (a) of the penal code chapter 87 of the laws of Zambia.

Particulars are that on 5th May 2013 in Kapiri Mposhi Mwape had canal knowledge of a male, Philip Mubiana against the order of nature.

And in the fourth and last count Philip Mubiana is charged with an offence of committing an unnatural offences contrary to section 155 (c ) of the penal code chapter 87 of the laws od Zambia as read with amended Act number 15 of 2005.

Particulars before court are that on 5 May 2013, Mubiana, while at Kapiri Mposhi district in central province did permit a male person James Mwape to have canal knowledge of him against the order of nature.

Magistrate Mbuzi declined to grant bail to the two men after an application by defense counsels when the matter came up for commencement of trial today.

The accused are being represented by William Ngwira and Mubanga Bwalya of SBN Legal Practitioners of Lusaka.

The defense applied for bail for the two accused stating that their clients were of fixed abode and that the offences that they are accused of committing are bailable.

The defense counsels also assured the court that the accused persons will comply with the bail conditions and avail themselves to the court when needed.

However, State Prosecutor and Divisional Prosecutions Officer, Hilda Banda  objected that  the accused persons should not be granted bail owing to their earlier abrogation of police bond which was given to them after they were arrested for the offences as charged.

Ms. Banda stated that the two had flouted the police bond which was given to them on 3rd may 2013 by committing the similar offence which they were charged for when they were released from police custody.

Ms. Banda also submitted that if given bail the two could interfere with their relatives who are state witnesses in the case .

She also submitted that considering the offences the accused are indicted for there is likelihood that society may rise against and harm them and hence they should be kept in police custody until further notice.

“The accused are being held in police custody to their advantage for security reasons so that society does not harm them looking at the offences they are accused of committing”, Ms. Banda said.

But Defense Counsel, William Ngwira argued that the opposition of bail by the state is against the presumption that an accused person is innocent until proven guilty.

Mr. Ngwira stated that the offences that the duo is accused of are based on allegations and not proven by the court and their continuous detention in police cells was against the fundamental provisions of the law.

But in his ruling Magistrate Mbuzi refused to grant bail to the accused stating that the defense had failed to invalidate the state’s objection of bail on the basis that the accused persons may go and interfere with the state witnesses who are their relatives.

Magistrate Mbuzi also ruled that once given bail there is a possibility that the couple may go and commit similar offences as charged bearing in mind that they did so when they were granted police bond upon being arrested.

“The defense has not countered the grounds by the state to oppose the granting of bail on the basis of interference with the witnesses and the court order can be unreasonable because how will the court be sure the accused will not meet and commit similar offences… I therefore see a danger with the defense application therefore the appeal for bail is refused and the status quo remains,” Magistrate Mbuzi ruled.

And Magistrate Mbuzi has adjourned the case to 5th June 2013 for determination of constitutional issues raised by the defense.

This was after the defense applied for adjournment to prepare formal

applications to raise constitutional issues in the High Court.

The defense applied that they needed time to raise and formally file the case of constitutional issues to the High Court and were hence asking for an adjournment.

But the state objected to the deferment of the matter arguing that the defense had not clearly stated the reasons for their application for an adjournment and the constitutional issues that they intend to raise to the high court.

However, Defense counsels submitted that they requested to be furnished with copies of medical reports on the accused to enable them get expert advice on the matter in contemplation of preparation of the defense.

“we wrote a letter to the state requesting for medical reports for our clients … we have not been answered until this morning when we have been served with a response that the state has rejected our request so in this court this trial is under ambush… we want to raise constitutional issues in the High Court in this matter”, Mr. Ngwira said.

“In the letter we pointed out to the state that the issue to be addressed is article 18(1) of the constitution which talks about the right to a fare trial… we are of the view that the medical reports should be made available in the interest of justice and for the accused to have fare trial”, Mr. Ngwira said.

Magistrate Mbuzi ruled that the defense can proceed with the application of the hearing of constitutional matters in the High Court while at the same time the Magistrates court continues with its business and quashed the defense application for an adjournment.

“If there are constitutional issues to be raised in the High Court you can proceed but that cannot stay the procession of the case in the Magistrate Court… so trial will commence,” Magistrates Mbuzi said.

However, after a five minute adjournment the defense reversed their earlier application for an adjournment based on the raising of constitutional issues in the high court.

Magistrate Mbuzi then adjourned the case to 5th June 2013 for determination of constitutional issues and commencement of trial.

Mwape and Mubiana entered a plea of not guilty last week.

The duo was arrested on 4th May 2013 for allegedly engaging in homosexuality contrary to the laws of Zambia as read with amended Act number 15 of 2005.

The duo will continue being remanded in custody.