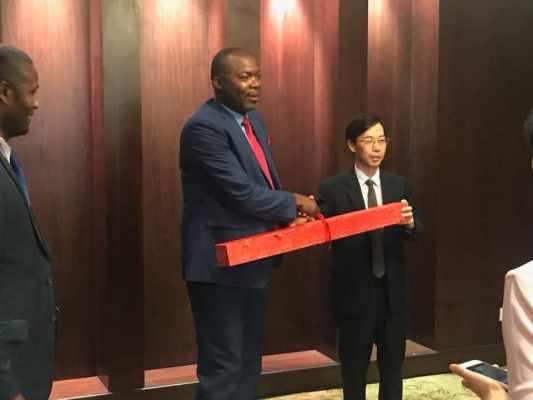 A technical team from China Railway Eryuan Engineering Group Company will next month visit Zambia over the planned commuter train system for Lusaka Province and other projects of interest.
The team will engage with technocrats, relevant Ministries and institutions.

And Mr. Lusambo who is in China attending the 17th Western China International Fair said the Zambian Government is concerned about the current congestion of roads in Lusaka Province and that plans are underway to address the issue in a comprehensive manner.

Mr. Lusambo said in addition to the on-going improvement of the road network, the Lusaka Provincial administration have targeted the implementation of a commuter railway system that will decongest traffic in the province.

He observed that Lusaka is growing at a fast rate and that there is need for timely intervention in terms of modern transport infrastructure that will facilitate efficient movement of people and goods.

CREEC is a world class engineering survey and design company that has undertaken various infrastructure projects across the African continent including in the road, rail and energy sectors.

In Zambia, CREEC has been responsible for the design and survey works on the Mansa to Pensulo and Kafue to Chililabombwe transmission lines.

The company has 60 years experience in designing high speed railway lines and is a subsidiary of China Railway Group Limited.

The company’s Deputy General Manager accepted Mr. Lusambo’s invitation to visit Zambia with a technical team that could engage with technocrats from Lusaka Province and relevant Ministries and institutions to get more details on the planned commuter train system for Lusaka Province and other projects of interest.

The company’s follow up visit to Zambia is scheduled for mid October 2018.

Speaking later in an interview with Sichuan Daily and Sichuan News Network, Mr. Lusambo noted that his delegation’s attendance of the 17th Western China International Fair in Sichuan Province had provided a platform to strengthen relations between Lusaka and Sichuan Provinces.

He further said the visit enabled fruitful networking meetings with the Sichuan Provincial leadership and business entities that expressed interest to enhance cooperation with Lusaka Province and Zambia in general.

I wish to report that my official trip to China was highly successful and a positive step cementing our warm bilateral relations with the People’s Republic of China.

Attending the 17th Western China International Fair in Chengdu City at the invitation of the Sichuan Provincial Administration was an eye opener. It is worth nothing that there exists a twinning programme between Lusaka and Sichuan Provinces signed in 2017.

I held bilateral talks with Sichuan Province Governor Mr Yin Li who commended His Excellency Edgar Chagwa Lungu for the strides that Zambia is making in attaining social and economic development. His Excellency Li also personally encouraged me to continue working hard for the people and that I had a bright future in politics.

I also held interviews with Journalists from Sichuan Daily and Sichuan News Network who were so interested in the Zambian development story.

Inspired by the lessons picked up on this trip, i will soon be holding a news briefing to announce in detail how we hope to shape the future of this great Province, this will be done after consultations with key government departments are done.