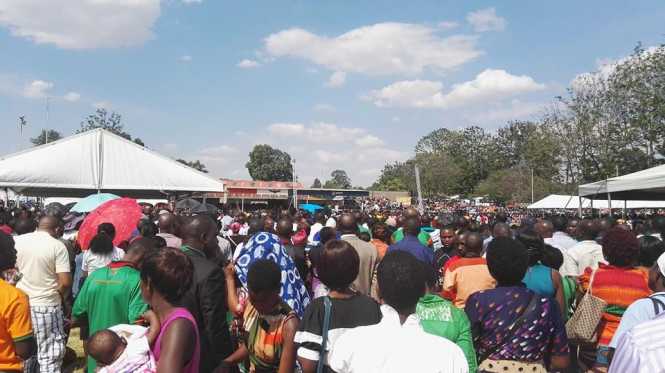 Zambians yesterday joined hands in fasting and praying for God’s interventions in different sectors of the country
Yesterday was a spiritual day as many Zambians from all walks of life joined hands in fasting and praying for God’s interventions in different sectors of the country.
In Lusaka’s Show Grounds, hundreds of Lusaka residents gathered as they prayed for reconciliation and forgiveness and asking God to heal the Zambian land.
Meanwhile, Chiefs took time to pray for the nation and asked God to take full control of all chiefdoms.
The traditional leadership that was represented by Chiefs Chipepo and Ngabwe pleaded with God that the Lord Almighty visits all chiefdoms in the country.
The Chiefs prayed earnestly to God that He may have mercy on the land so that the country can prosper in everything the nation does.
The Chiefs also prayed for the land of Zambia by getting portions of soil and spoke a work of prosperity to the land and that everything the nation will do will be a blessing.
And in his homily, Bible Gospel Church in Africa (BIGOCA) Overseer Bishop Peter Ndhlovu says there is need for Zambians to call on God earnestly and turn away from wickedness and violence and ask God to heal the land.
Bishop Ndhlovu says the country has witnessed so many cases of violence in the recent past and thus the need to ask God to give Zambians grace to avoid such negative vices.
And Bishop Ndhlovu says Prayer will bring the country’s economy back on track because God will give wisdom to Government workers.
And Bishop Edward Chomba, before his opening prayer, clarified that the gathering is not a political gathering but that people came from all walks of life to ask God to intervene in social and economic challenges in the nation.
Some of the notable people that were part of the prayers include; Fourth Republican President Rupiah Banda, MMD President Nevers Mumba, NAREP Leader Elias Chipimo Junior, ZDDM President Edwin Sakala, Green Party President Peter Sinkamba, Fourth Revolution Leader Erick Chanda among others.
First Republican President Dr. Kenneth Kaunda released a fatherly blessing on President Lungu and President Lungu in turn released a blessing to the nation by way of releasing a dove during the  prayers in the show grounds.