Home WORLD Africa I am learning a lot from Mugabe-Lungu 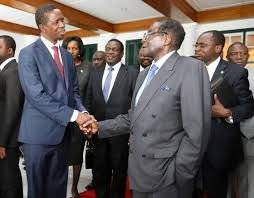 Republican President Edgar Lungu has held one on one talks with his Zimbabwean President Robert Mugabe at State House.

President Lungu told Journalists after the meeting that lasted almost two hours that he discussed various issues with Mr. MUGABE who he described as an elderly states man in the region who knows all corners.

He says he is learning a lot from Mr. Mugabe.

President Lungu adds that there are more bigger things to talk about on Wednesday during the summit on industrialization.

He says he is already getting used to the hospitality of Zimbabwe which he is visiting for the first time as Head of State but has been here before.

And President Lungu’s Special Assistant for Press and Public Relations, Amos Chanda says the President will address the SADC Heads of State Summit on Wednesday.

He says the President will argue that countries like Zambia will need to increase value addition in order to get more benefits from their raw materials.

Mr. Chanda told the media that Mr. Lungu will also argue for the need to increase trade within the SADC region.-ZNBC