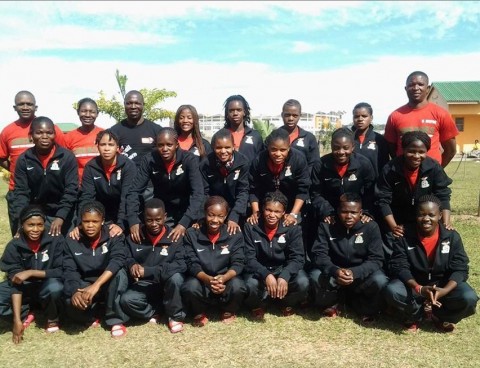 A full of confidence Senior Women Chipolopolo National Soccer team has  departed for Harare, Zimbabwe where they will meet their counterparts for the first leg final round of the Afcon Women finals to be held in Namibia later this year. Coach Charles Bwale has picked eighteen women to do battle for Zambia at Rufaro Stadium on Sunday.

Bwale says he will approach the game with a lot of caution especially that the Zimbabwe women have a very sharp front line, but was quick to say he will not be defensive. “I saw them when they played South Africa and I noticed that they have a porous defence which we hope we can capitalise on”

Asked on how many women have been fused in from the Costa Rica squad Bwale said only goalkeeper Hazel Nali has joined the senior team for now.
Zambia is 180 minutes away from qualifying to the Women Africa Cup finals in October this year which will be held in Namibia.

And captain for the side Kabange Mupopo says her team is focussing only on one thing and that is victory. Mupopo is confident that the training they have had is siffient to silence the Zimbabwe Women Warriors right in their backyard.

The full list of players and officials is as follows: