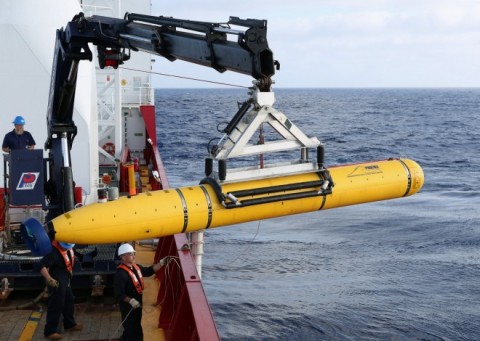 The eighth underwater drone mission to search for the missing Malaysia Airlines flight MH370 has failed to find any evidence of plane wreckage on the sea bed.

The Bluefin-21 submarine employed for the task has so far screened over two-thirds of the narrowed search area.

The underwater hunt is expected to finish within this week, even though the probe will continue and other approaches will be tried out, said Malaysia’s acting transport minister Hishammuddin Hussein at a press briefing in Kuala Lumpur.

Since its fourth mission, the submarine was reprogrammed to scour the seas 604 feet below its permissible limit of 14,800 feet. The part of the Indian Ocean narrowed down for the search is deeper than the previously estimated range at some places, which necessitated alteration in the drone’s threshold limit to “acceptable” levels.

“The [underwater drone] reached a record depth of 4,695 metres [15,404 feet]… Diving to such depths does carry with it some residual risk to the equipment and this is being carefully monitored,” the US Navy said.

Meanwhile, the oil slick discovered near the search area by ADV Ocean Shield turned out to be unrelated to the missing Malaysian jet, as it was later confirmed that it was not hydraulic fluid from aircraft engine.

On the 5th and 8th of April, four distinct underwater pings were detected, which were nearly consistent with black box signals. But most of the leads in the past six-week search operations turned out to be false subsequently.

Many mysteries surrounding the plane still remain unresolved, such as what could have led the plane to go off course by thousands of miles, and where did it precisely end its journey.

Interestingly, the missing plane was carrying four emergency locator transmitters; ELTs transmit an aircraft’s location to a satellite in case it crashes or makes contact with water, CNN reported.

Experts point out that either the ELTs did not activate, or if they did, why did the satellites fail to pick up the signals?

Malaysia Airlines is reported to have declined to comment on the issue when contacted.

Dozens of military aircraft and ships continue to search for possible wreckage of the missing plane over an approximate area of 20,000 square miles.

The efficiency and speed of the search operations also depend on the weather, which is not quite hospitable in the region. Forecasts predict high winds and rains from tropical cyclone Jack lurking in the vicinity of the search zone, complicating the mission.