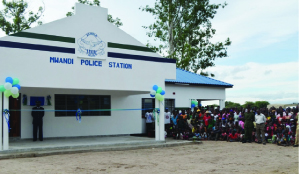 Chief Macha of the Tonga speaking people in Macha has called on government to construct a police station in his area.

In an Interview with ZANIS recently Chief Macha explained that currently they are renting a room at the hospital in the area.

He however complained that police officers sent to his area to man the post are more concerned with filling their pockets instead of servicing the people in the area.

He said four have so far been forced to leave the area due to the corrupt activities of trying to enrich themselves instead of doing their duty.

Chief Macha stated that with a police station in the area there will be more than one police officer thereby reducing incidents of corruption activities.

He went on to say there only being one officer makes it difficult for him to cater for a large population and so there is urgent need for government to construct a police station and send in more police officers to the area.

He said land has already been found where a police station can be put up.

He added that besides a police station being urgently needed there is need to also look into the issue of transport and other essentials.