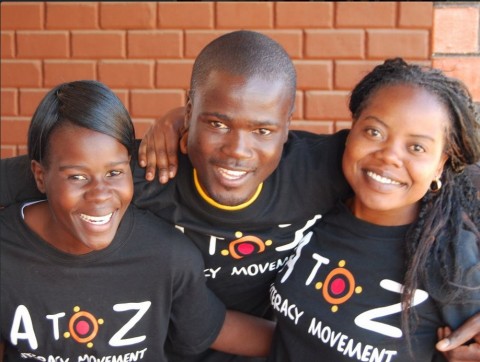 The A to Z Literacy Movement was born in 2009 from a trip to the African country of Zambia.

“Africa was always in my heart and on my radar,” said Mal Keenan, a literacy coach at Bernotas Middle School in Crystal Lake and the movement’s founder.

Keenan was going to go to Ethiopia but was convinced by a friend to go with her to Zambia.

“I fell in love with the country and the people,” Keenan said.

Along with that love was the realization of how dire conditions are in Zambia, a country the size of Texas in southern Africa. The nation has been ravaged by the AIDS epidemic, leaving half the population under the age of 16, she said.

“I was racked about it,” Keenan said of her reaction to seeing so many orphans and children who were marginalized.

She knew she had to do something, so she decided to start shipping culturally appropriate books to the neediest children in Zambia.

“Books offer to kids what can be in life,” Keenan said of the transformative and inspirational power of reading.

Keenan and her group of volunteers works with the Shine Reading Academy, as well as other schools, to provide books, school lunches and the yearly salary for two teachers in Zambia.

Each year, Keenan and at least one other teacher travel to Zambia for two weeks to provide training for the teachers there. This year, a group of four will make the trip in June.

“It’s an honor for me to serve them and the teachers who serve them,” Keenan said of the students who are touched by her efforts.

The group also has been taking on local projects. Last year, it provided a library of English and Spanish books for the Garden Quarter Apartments in McHenry, as well as conducted three family literacy nights.

“We’re local and global,” Keenan said. “Our mission is to help impoverished kids.”

Since 2009, books have been sent not only to Zambia, but also to Ghana, Uganda and the Dominican Republic. They also have been sent to children in Illinois’ Pembroke Township and to the community of Washington, which was devastated last year by a tornado.

All of the books come from book drives, library sales and donations. To learn more about the organization, as well as how to help, visit www.atozliteracy.org.

Additional support comes through fundraisers, such as the one that will take place next week.

Donors must mention that the donations are for the A to Z Literacy Movement, either in person or by writing on the bags or attaching a flier.

An additional fundraiser will take place May 28, when members of the National Junior Honor Society at Lundahl and Bernotas middle schools will take part in a walk-a-thon. Community members can sponsor students by contacting Keenan at [email protected]

In the meantime, the goal of the Savers secondhand donation drive is to have 400 bags donated.

“I’m hoping people will do some spring cleaning,” Keenan said.