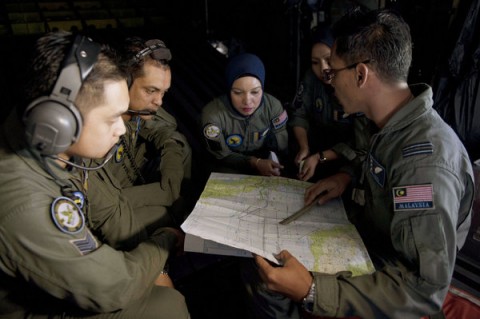 Prime Minister Najib Razak of Malaysia announced on Saturday afternoon that Malaysia Airlines Flight 370 left its planned route from Kuala Lumpur to Beijing as the result of “deliberate action” by someone aboard.

Mr. Najib also said that search efforts in the South China Sea had been ended, and that technical experts now believed that the aircraft could have ended up anywhere in one of two zones — one as far north as Kazakhstan in Central Asia, and the other crossing the southern Indian Ocean.

That conclusion was based on a final signal from the plane picked up on satellite at 8:11 a.m. on March 8, nearly seven hours after ground control lost contact with the jet, he said.

While Mr. Najib said that investigators had not ruled out alternatives to hijacking, his remarks represented official confirmation that the disappearance of the Boeing 777-200 a week earlier had not been an accident. He noted that one communications system had been disabled as the plane flew over the northeast coast of Malaysia and that a second system, a transponder aboard the aircraft, had stopped broadcasting its location, altitude, speed and other information at 1:21 a.m. while the plane was one-third of the way across the Gulf of Thailand from Malaysia to Vietnam.

Military radar data subsequently showed that the aircraft turned and flew west across northern Malaysia before arcing out over the wide northern end of the Strait of Malacca, headed at cruising altitude for the Indian Ocean.

The Seventh Fleet of the United States Navy said in a statement on Saturday that its search for the plane now encompassed the Strait of Malacca and beyond to the Bay of Bengal — an enormous area. But Mr. Najib said that representatives of many more governments across the region had been contacted, since the plane might have been flying for many hours after it left Malaysian airspace.

The flight had been scheduled to land at 6:30 a.m. in Beijing that day, so the latest time given by Mr. Najib — 8:11 a.m. — could have been toward the very end of the plane’s fuel.

By noting that investigators had not yet concluded that the episode was a hijacking, Mr. Najib seemed to leave open the possibility that the cockpit crew might have chosen to take the aircraft to an unknown destination. He declined to take any questions, and a spokesman said that technical experts would hold a separate news conference to answer questions later in the day. But officials later said that the second news conference had been canceled.

“The investigation team is making further calculations, which will indicate how far the aircraft may have flown after the last point of contact,” Mr. Najib said, reading a statement in English. “Due to the type of satellite data, we are unable to confirm the precise location of the plane when it last made contact with a satellite.

“However, based on this new data, the aviation authorities of Malaysia and their international counterparts have determined that the plane’s last communication with a satellite was in one of two possible corridors: a northern corridor stretching approximately from the border of Kazakhstan and Turkmenistan to northern Thailand, or a southern corridor stretching approximately from Indonesia to the southern Indian Ocean,” he said. “The investigation team is working to further refine their information.”

Continue reading the main story
The northern arc described by Mr. Najib passes through or close to some of the world’s most volatile countries that are home to insurgent groups, but also over highly militarized areas with robust air defense networks, some run by the U.S. military. The arc passes close to northern Iran, through Afghanistan and northern Pakistan, and through northern India and the Himalayan mountains and Myanmar. An aircraft flying on that arc would have to pass through air defense networks in India and Pakistan, whose mutual border is heavily militarized, as well as through Afghanistan, where the United States and other NATO countries have operated air bases for more than a decade.

Air bases near that arc include Bagram Airfield in Afghanistan, where the U.S. Air Force’s 455th Air Expeditionary Wing is based, and a large Indian air base, Hindon Air Force Station.

The southern arc, from Indonesia to the southern Indian Ocean, travels over open water with few islands stretching all the way to Antarctica. If the aircraft took that path, it may have passed near Australia’s Cocos (Keeling) Islands. These remote islands, with a population of fewer than 1,000 people, have a small airport. To the east of that route is Western Australia.

The Indian Ocean, the third-largest in the world, has an average depth of more than 12,000 feet, or more than two miles.

Mikael Robertsson, a co-founder of Flightradar24, a global aviation tracking service, said the way the plane’s communications were shut down pointed to the involvement of someone with considerable aviation expertise and knowledge of the air route, possibly a crew member, willing or unwilling.

The Boeing’s transponder was switched off just as the plane passed from Malaysian to Vietnamese air traffic control space, thus making it more likely that the plane’s absence from communications would not arouse attention, Mr. Robertsson said by telephone from Sweden.

“Always when you fly, you are in contact with air traffic control in some country,” he said. “Instead of contacting the Vietnam air traffic control, the transponder signal was turned off, so I think the timing of turning off the signal just after you have left Malaysian air traffic control indicates someone did this on purpose, and he found the perfect moment when he wasn’t in control by Malaysia or Vietnam. He was like in no-man’s country.”