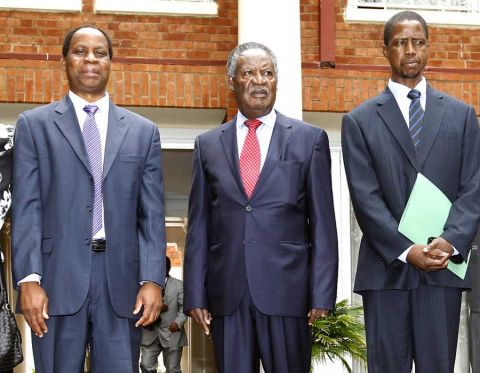 Agriculture and Livestock Permanent secretary Julius Shawa has praised Katete district agriculture office for exposing cases of malpractice and subsequent prosecution of cooperative leaders involved in theft of inputs under the Farmer Input Support Program (FISP).
The Permanent Secretary who is on a provincial tour of eastern province said it was sad that government is spending a lot of money on the FISP while some selfish people were depriving beneficiaries of their entitlement.
ZANIS reports that the Mr. Shawa was speaking when he paid a courtesy call on Katete District Commissioner Colonel Peter Kaisa in Katete .
Mr. Shawa said government wants to see to it that any person involved in the FISP malpractices is prosecuted .
He said currently government is working on modalities of ensuring that farming inputs are delivered to the farmers in good time during the 2014/2015 farming season.
He expressed hope that the next farming season farmers should expect to receive all farming inputs in good time in readiness for the farming season.

Meanwhile the PS has assured Katete District Commissioner Peter Kaisa that government will fully support the proposed plans of establishing a much better agriculture college in the district.
And Katete DC Colonel Peter Kaisa has praised government for sending farming inputs to the district.

Col Kaisa explained that the district during this year’s farming season received a total of 52, 574 bags of D compound fertilizers and 49, 480 bags of urea fertilizers respectively.

He Kaisa said the district has so far recorded a total of seven cases of malpractices under the FISP program which have already being reported and are being investigated by the police.

Col Kaisa has also called on government to consider revamping the citrus industry in the district.