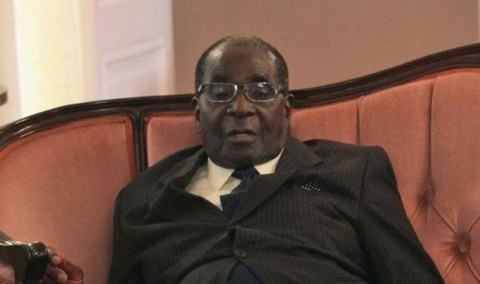 Rumours have been circulating about his health for several weeks with some websites suggesting the veteran leader was seriously ill while others even said he had died.

Mugabe appeared at his official State House residence in Zimbabwe to accept condolences for his late sister.

The 89-year-old paid tribute to his 78-year-old sister Bridget who died in Harare after three years in a coma.

Mugabe, who has spent two weeks of his annual leave in Singapore, appeared downcast over his bereavement but showed no visible signs of ill health as he greeted senior party officials and spoke of his sister’s life.

Mugabe has denied that previous trips to Singapore were for prostate cancer treatment and his lieutenants dismissed the rumours as baseless.

Joice Mujuru, Mugabe’s vice-president both in government and in the ruling ZANU-PF party, is frontrunner in the race to succeed the president. But her main rival, Justice Minister and former defense minister Emmerson Mnangagwa, has not given up, analysts said.

Mugabe  maintains there is no crisis, arguing that the party is strong and organised enough to choose his successor at the right time. His critics say he wants to die in office.

In an editorial, the private Daily News, which is critical of Mugabe’s rule, called for more transparency about his health.

“Perhaps one way of mitigating the speculation around the President’s health is for the government to be as transparent as possible about his travels and his health, obviously balancing this against his rights as well as the interests of his family,” the newspaper said.

Mugabe has ruled Zimbabwe, formerly called Rhodesia, since the country’s independence from Britain in 1980.