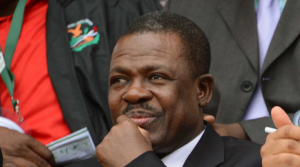 Wynter Kabimba was born on January 12, 1958 in Mumbwa District of Central Province. He graduated as a lawyer from the University of Zambia in 1981. He is married with two daughters and a son.

Kabimba resigned his position in 1995 to set up his legal practice in Lusaka while at the same time venturing into the arena of Zambian politics. He was appointed Secretary General of the Patriotic Front in April, 2009 in addition to his responsibilities as chairman of the Local Government Committee of the party’s Central Committee, the highest policy making organ of the party.

As Secretary General Kabimba is responsible for the overall administration of the party countrywide and oversees the day to day contact between the party’s secretariat in Lusaka and the general membership and party structures. This co-ordination has seen the rapid growth of the Patriotic Front since 2009 catapulting it to power after the 2011 elections.

Though Kabimba has a short political career he has been credited with the democratization of the party and firm establishment of structures and organs thus transforming PF into a potent and viable ruling party.

After winning the 2011 elections, Kabimba has continued as the CEO of the PF and under him the party has continued with its meteoric growth, even penetrating regions which were in the past thought to be strongholds for other political parties. These include Western, North-Western and Eastern Provinces.

Kabimba is fearless, bold and hardworking.