Zambians have perhaps never witnessed a period during their country’s history when donations and gift-giving by any politician and/or political party were as prevalent, unchallenged and apparently deliberate as they have this election year.

Money, vehicles, bicycles, and corn meal (or mealie meal) are being “showered” lavishly and selectively on chieftains and other societal groups throughout the country like manna from Heaven!

President Edgar Lungu and the Patriotic Front are clearly the major culprits in this enterprise.

This is clearly not only unscrupulous and predatory; it is, I believe, also not consistent with democratic norms, regardless of whether the gifts and/or donations were actually pledged before the year 2021 when the general elections are scheduled to take place.

There are a lot of questions arising from the unprecedented season of gift-giving and donation-craze. For example, is there any way of telling whether or not the gifts and/or donations are laundered, or are being funded from public coffers?

Will the forthcoming elections be deemed or expected to be free and fair when some of the politicians and/or political parties in the country do not have the wherewithal to compete in the process of rendering politically clutched gifts or donations?

And how can one not conclude that the gifts and/or donations are not designed to bribe or buy off voters, since they are being handed out during the election year?

Parliament should, accordingly, seriously consider the prospect of amending the current Electoral Code of Conduct by prohibiting political parties and their members, supporters and candidates from offering gifts or making donations to individual citizens, groups of citizens, chieftains, or institutions after the date for a by-election has been announced by the Electoral Commission of Zambia, or during any year when Presidential, Parliamentary and Local Government Elections are scheduled to be held.

The amended Electoral Code of Conduct, like the existing one, should also stipulate the nature of potential sanctions against violators.

Parliament needs to seriously consider this issue if it is to play a meaningful role in facilitating the evolvement of a “successful democracy” in our beloved country—that is, a well-functioning democratic state which, to paraphrase the World Bank (2000:50), provides adequately for the entrenchment and preservation of healthy political competition and popular participation by citizens in the electoral process.

Such a state of affairs is possible only when the electoral setting is free from vote-buying, vote-harvesting, bribing voters, rigging of elections, intimidation of political opponents or their supporters mainly by the ruling political party, and any other similar electoral malpractices.

And “healthy political competition” must be based almost entirely on the soundness of political contestants’ contemplated policies, projects and programmes in addressing the catalogue of recurrent socioeconomic problems facing our beloved country and its people.

My fellow citizens will, therefore, do well for their families and the future of our beloved country not to be hoodwinked by the gifts and donations being “showered” on them when they cast their valuable votes on August 12, 2021. 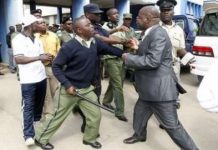