The Young African Leaders Initiative (YALI) has written to the Public Protector to immediately punish the Financial Intelligence Centre Director, Mary Tshuma and the Board.

In a letter by YALI President. Andrew Ntewewe dated 11th June 2018, YALI states that it was pursuing the matter in accordance with Article 244(1), (2), (a) of the Constitution and Section 13(1) of the Public Protector Act no.15.

YALI contends that the Board and its Director, Mary Chirwa-Tshuma breached the Financial Intelligence Act of 2010 as amended in 2016, by publishing details of the report to members of the public.

YALI also contends that the information routinely gathered by the FIC was wide and doesn’t constitute acts of crimes for now, until verification and further investigations was done on the reported suspicious transactions by law enforcement agencies.

YALI contends also that at this stage, the information gathered by the FIC was raw and required further investigations.

YAlI emphasized that the FIC was not a law enforcement agency and the information it gathered was Intelligence in its nature and the disclosure breached the FIC Act of 2010 and known government reporting structure and practice of information.

YALI fears that the Information has prejudiced future investigations on the matter and has jeopardized the successful prosecution of the mentioned cases. 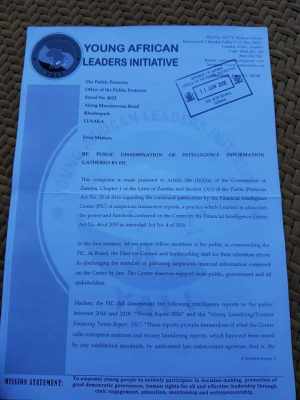