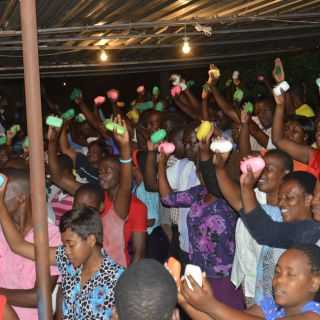 A HARARE prophet claims to have anointed soaps for his female followers which enables them to lure men into love relationships.

The Man of God whose church is located opposite Glen View 8 Poly Clinic, claimed among other things that the soap was capable of, it can also lure lost lovers. ‘All married women your prayed have been heard,if your husband is cheating on you and even if he has lost interest in you se_xually your anointed soap is the answer.

“All you have to do is wash your underwear with that soap or simply bath yourself,make sure the soap passes where he has lost interest and you will definitely come back with a testimony.

“To the singles if you are unlucky in love,anointed soap is the answer,you will find men approaching you,they will see you attractive and beautiful.

“Ugly women will be married this season because of what God will be doing through anointed soaps, ” he said.

During the service,congregants had different types of soaps which they wanted the prophet to pray for them so that they may be converted into supernatural soaps.

ebc24b1b-0b45-4067-9400-e49c531d32c3
Male followers of the prophet were also promised spiritual spectacles which would enable them to see supernaturally if they use the anointed soaps.

Speaking to H-Metro after the service prophet Freddy said. “I use anointed soaps because God instructed me to do so,these are soaps that they brought and all I did was anoint them. “God has his way of doing things depending on the situation,Prophet Elisha used a stick that the axe may be recovered from a river in 2 Kings Chapter 6 verse 6.

“At one stage our master Jesus spat on the ground and made clay of the spittle,and anointed the eyes of a blind man. “A prophet acts upon the word spoken to him by God and that word will produce results.

“What is important is telling the congregants not to rely on the anointed soaps but rather to rely on God who anoints the soaps.

“I am sure that a lot of testimonies will come from those who have their anointed soaps,”he said.