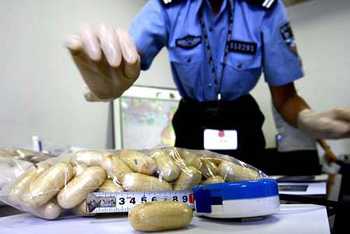 A 37-year-old woman from Zimbabwe was caught with 12kg of a chemical narcotic, suspected to be methaqualone, worth $200 000 by customs officers at the Mumbai international airport in the early hours of Monday while she was leaving the country. A sniffer dog at the departures terminal detected the presence of the drug during the customs check.

Nomthandazo Nkomazana was held at around 3am before she was slated to board the Etihad flight EY 205 to Johannesburg in South Africa with a stopover at Abu Dhabi.

From Johannesburg, Nkomazana planned to enter Zimbabwe using another route. She was held after the sniffer dog Annie passed by her bag and gave “positive signals” to its handlers and other customs officers who then conducted a separate check and discovered the contraband.

The white crystalline powder was then concluded to be methaqualone and weighed at 12 913kg and valued at $200 000 in the illicit market. “The powder was concealed within the specially-created false compartments inside the top and bottom of her check-in suitcase,” said an officer from the Air Intelligence Unit (AIU).

Nkomazana was arrested under relevant sections of Narcotic Drugs and Psychotropic Substances Act and remanded to judicial custody.

“In her questioning, she has claimed that she was handed over the drug by her brother-in-law in Delhi who had asked her to hand it over to her sister in Zimbabwe. She says she did not suspect anything since he was her immediate relative, and did as he instructed,” said another AIU officer.

She had come from a New Delhi in a domestic flight the previous day and stayed for a night at a local hotel in Mumbai.

According to the immigration stamps on her passport, she had been in the country for not more than a few weeks.

Drugs including amphetamine, ketamine, methamphetamine and methaqualone are heavily smuggled out of India and are illegally manufactured in sick industrial units and small-time pharmaceutical factories.
— Agencies