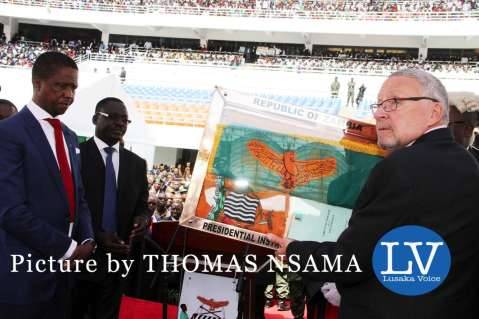 NEW YORK, Sunday, 25 January 2015 – United Nations Secretary-General Ban Ki Moon has congratulated Zambia for the peaceful and democratic presidential election, describing the country as “an example in the region”.

The Office of the spokesperson of the Secretary-General said Mr. Ban congratulated the people, the Government, political parties and the electoral authorities for the peaceful manner in which Zambia organised the presidential election, despite difficult weather conditions.

“Zambia’s long record of peaceful transitions through proper democratic processes is an example in the region,” the office of the spokesperson of the Secretary-General said. “The Secretary-General reaffirms the readiness of the United Nations to continue to work with the Government of Zambia to press ahead with its national priorities and to support the Government and people of Zambia as we all move towards a new sustainable development agenda.”

Ruling Patriotic Front (PF) presidential candidate, His Excellency Mr. Edgar Chagwa Lungu, was elected sixth President of the Republic of Zambia in the election held on 20 January 2015, following the death of the incumbent, His Excellency Mr. Michael Chilufya Sata, on 28 October 2014.

Permanent Mission of the Republic of Zambia to the United Nations