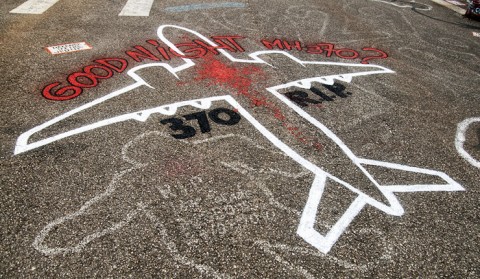 Relatives of vanished Malaysia Airlines Flight 370 passengers wailed and yelled in a Beijing hotel Thursday as the airline announced it was closing the assistance centers where they’d been gathered for weeks — effectively telling the families to go home.

The closures also will mean no more mass daily briefings for the relatives — news that sparked a new wave of anguish and despair for the hundreds who heard it at Beijing’s Lido Hotel.

“What can we do?” a relative yelled, as others kneeled in front of police who had assembled in the hotel briefing room to keep order.

“Who will find our family members?” another shouted.

The airline said the center at the Lido Hotel, where the company has hosted families since March, would close Friday. Centers elsewhere will close by May 7, it said.

“Instead of staying in hotels, the families of MH370 are advised to receive information updates on the progress of the search and investigation and other support by Malaysia Airlines within the comfort of their own homes, with the support and care of their families and friends,” the airline said in a news release.

The briefing at the Lido Hotel came on the day that the Malaysian government released its preliminary report on the plane’s March 8 disappearance.

The hotel has been an important hub of information for relatives in China. More than 100 passengers on the plane are Chinese.

The airline said it would open different “family support centers” in Beijing and Malaysia’s capital; it wasn’t immediately clear what those centers would do.

‘People started to break down’

Sarah Bajc, the American partner of Flight 370 passenger Philip Wood, said she was one of about 500 people at Thursday’s Lido Hotel meeting.

The briefing began with the airline’s CEO making a seven-minute statement in English by video, Bajc said. Most of the relatives didn’t understand the message until a Chinese translation was given afterward, she said.

“That’s when people started to break down,” she said.

Bajc said she left the room, saying the scene started to feel tense.

“I could hear a lot of yelling. Some of the police officers that were outside went in, and they started to file family members out through a separate exit,” she told CNN’s “New Day.”

Calm was restored when Chinese officials continued the briefing and ensured the families that the search would continue, and that the relatives wouldn’t be forgotten, a CNN crew outside the briefing room reported.

Bajc said Chinese relatives previously told her they dreaded the day that the hotel centers would close, fearing they wouldn’t get timely updates at their rural homes.

“They are very distraught, because the average Chinese family member will be sent home to mostly a very rural place with limited access to (the) Internet, and they just feel like all lines of communications will be cut,” she said.

The airline also said Thursday it would begin making advance compensation to the Flight 370 passengers’ next of kin, to help with their immediate economic needs.