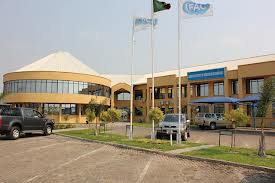 THE Zambia Institute of Chartered Accountants (ZICA) has laid a foundation stone for the construction of a state-of-the-art convention centre in Livingstone at a cost of US$ 300 million.

ZICA recently acquired a 48 hectares piece of land on the boundary of Mosi-oa-tunya National Park in Livingstone to construct the convention centre.

Speaking in Livingstone at the weekend when he laid the foundation stone, outgoing ZICA president Frederick Banda said the convention centre would have capacity to accommodate about 2, 000 delegates.

ZICA also has plans to construct a five-star hotel, a mini-conference and a park within the same area.

‘‘The convention centre will add value to the people of Livingstone and Zambia at large as it will create jobs in the country,’’ Mr Banda said.

And ZICA chief executive officer, Hapenga Kabeta said in an interview that the Institute would erect a marquee at the same site within two years to be hosting big events.

‘‘If you remember, ZICA members used to meet at Zambezi Sun Hotel for various meetings and we used to attract about 300 to 400 people across the country.

‘‘Last year, we had 700 members, while we have about 900 delegates this year during our annual gathering. This is why it is increasingly becoming necessary to find a suitable place for our meetings in Livingstone as the current facilities are not meant for our bigger gatherings,’’ he said.

ZICA has lately been holding its annual meetings outside Zambezi Sun Hotel in a tent as its members cannot be accommodated inside the hotel conference room.

‘‘In Lusaka, only the Government Complex can manage to host our meetings but our members want to have their meetings outside the capital city.

‘‘The convention centre is not only for ZICA but a contribution to the tourism sector of Livingstone and other stakeholders who may be interested to hire it. For instance, lawyers and engineers usually hold their annual meetings here and they can hire our facility,’’ Mr Kabeta said.