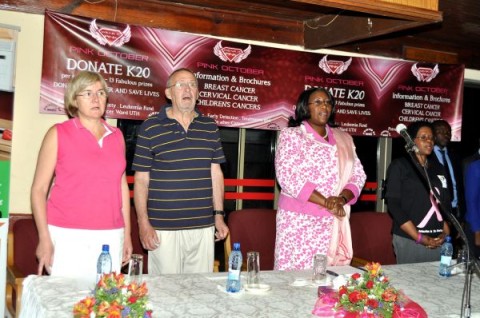 FIRST Lady Christine Kaseba and Vice-President Guy Scott have won awards for their contribution to nutrition development in the country.

And the Government has challenged the media to highlight nutritional issues to promote good health among Zambians.

Health Minister Joseph Kasonde said yesterday at the Zambia Civil Society Organisations Scaling up Nutrition Alliance (CSO-SUN) awards ceremony that the Government was fully committed to reducing chronic under-nutrition by 59 per cent in the next 10 years with local and international support.

Dr Kasonde said one of the measures taken by the Government to improve nutrition was the launch of the first 1,000 Most Critical Days programme in April this year.

He said the Government was committed to galvanise political leadership at a higher level to move the strategy forward so that nutritional outcomes were properly enshrined as key goals of national development policies and plans.

“The Government also recognises scaling up effective, evidence-based actions in the country which will quickly reduce under-nutrition, especially among young children and their mothers during the 1,000-day period from conception to the child’s second birthday,” Dr Kasonde said.

He said working together with stakeholders, the Government would steadily increase people’s access to affordable nutritious food and other determinants of nutritional status such as clean water, sanitation, healthcare, social protection and initiatives to empower women and children who were the most affected.