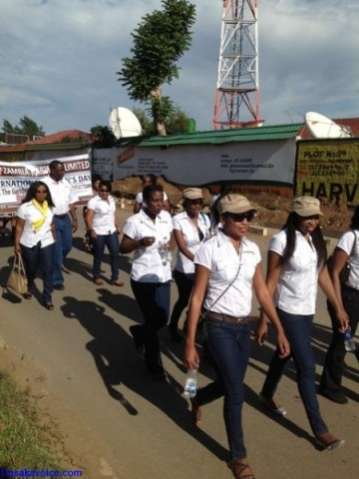 WOMEN´S Day celebration ends with a bang as Hundreds of Zambian music lovers descended to the government complex Banquet hall to witness the spectacular event, while people also enjoyed drinking their beers.

Legendary musicians Sista D, Judy, and many other female artist proved to be popular among fans.

Sista D and her band and Judy also became the toast of the night when they sang songs of Gender Based violence and child abuse, much to the delight of fans.

The Diva´s night festival, which was year commemorated under the theme ´Gender Agenda Gaining Momentum´, came to an end last Friday midnight . The one day annual event which falls on March 8 was celebrated in style with various music genres – kwaito, gospel and jazz.

Rn B singer Judy seemed to be enjoying herself since she danced throughout the evening as she also celebrated her 23rd birthday which fell on the same day.

Janet of Kabulonga , said she could not wait for a similar event next year as this year´s was massive.

“The Women´s day Festival brings the women of this country from different walks of life together, I have had a lot of fan and looking forward to next years festival,” she said.

How ever some women complained of the show ending prematurely,and wished that the celebration could go on till the next morning,

¨We are married women and we told our husbands that we had gone for Divas night,we told them we would not be back until the next morning but the organizers have cut our night short, they also lied that Mampi would be at the show but she wasn´t even there¨ she said.