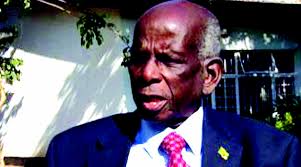 PRESIDENT Michael Sata has declared a three-day national mourning period for veteran soccer commentator and journalist Dennis Liwewe.
The late Mr Liwewe, 78, died at Levy Mwanawasa General Hospital in Lusaka on Tuesday where he was admitted for a liver ailment.
Secretary to the Cabinet Roland Msiska announced the development in a press statement released in Lusaka last evening.
“The Secretary to the Cabinet wishes to inform the general public that His Excellency the President of the Republic of Zambia, Mr Michael Chilufya Sata, has declared a three-Day national mourning in honour of the late Mr Dennis Liwewe, legendary football commentator, who died on Tuesday, April 22, 2014 at Levy Mwanawasa General Hospital.
“The period of national mourning will run from Thursday, April 24 to Saturday April 26 2014,” he said
Dr Msiska said during the period of national mourning, all flags would fly at half-mast and all radio and television stations would play solemn music from 06:00 hours to 18:00 hours every day.  All activities of entertainment nature should either be postponed or cancelled.
Dr Msiska said Mr Liwewe, who was until his death, consultant at the Public Service Management Division’s Future Search Programme, would be put to rest on Saturday at the Memorial Park in Lusaka.
Burial would be preceded by a church service at the Cathedral of the Holy Cross at 09:00 hours.
The funeral gathering is being held at house number 19B Nsumbu Road, next to Lusaka Trust Hospital, Woodlands.
The veteran commentator who is survived by a wife Sylvia, four children and 11 grand children, excelled in journalism starting out in 1971 at the then Anglo-American Corporation, as a junior reporter onthe mining newspaper – the Nchanga Drum.
He later rose to the position of assistant editor, and ultimately editor of the publication. Four years later, he was made public relations officer and in 1974, he moved to Lusaka as director of media and public relations at the Zambia Consolidated Copper Mines (ZCCM).
Mr Liwewe, who was awarded with the Order of Distinguished Service in 1977 by first Republican President Kenneth Kaunda for his contribution to the development of soccer, had been involved in Zambian football for the last four decades covering over 14 Africa Cup finals.
His passion for Zambian football saw him become one of the most moving eulogies on Zambian television after the 1993 Gabon Air disaster in which the entire national soccer team and plane crew members perished.