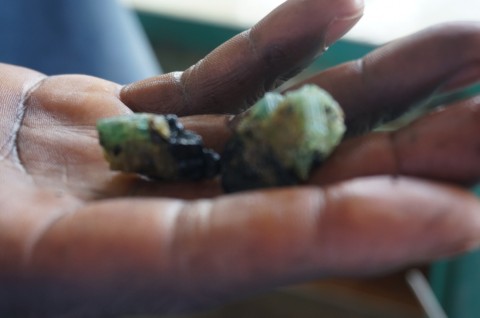 CHIEF Chembe of the Lala-speaking people of Luano District in Central Province has called on the Government to address illegal mining and other unlawful economic activities in his area.
Chief Chembe told ZANIS in Mkushi that his chiefdom had been experiencing rampant illegal mining and cutting down of trees by people believed to have come from Lusaka via the neighbouring Chongwe District.
He said the illegal cutting down of trees had been escalating since the beginning of this year and  that such illegal activities were hampering  development prospects in the area.
The traditional ruler said the matter deserved serious attention as reports of deforestation were coming from all parts of his chiefdom. He said  deforestation was threatening the environmental and
economic wellbeing of the area.
In reference to mining, the Chief urged Government to help in facilitating for serious investors, explaining that such a move would bring benefits to the residents.
He said  illegal mining of minerals such as gold, quartz and malacite was prevalent as miners did not even seek his consent.
Chief Chembe cited Mulungushi and Kabombo areas as being the most affected by the illegal activities.
Mwalala Ward Patriotic Front area councillor Benford Katiti said the Government should work on the Old Mkushi-Chembe Palace, and  Munyeta-Liteta roads.
He said the Rural Roads Unit (RRU) should help work on the feeder roads.
He explained that the condition of the two roads was bad. He said that the Munyeta–Liteta road was strategic to linking Munyeta in Rufunsa District with Luano District’s Liteta area.
Mr Katiti observed that the Chembe-Old Mkushi road was also of strategic importance as it linked Chembe Chiefdom to Kanyeshya chiefdom in the plateau areas of Luano District.
He charged the roads in Chembe Chiefdom had never received attention since the early years after independence, adding that there was need to use machinery such as earth moving equipment when constructing these roads.-ZANIS