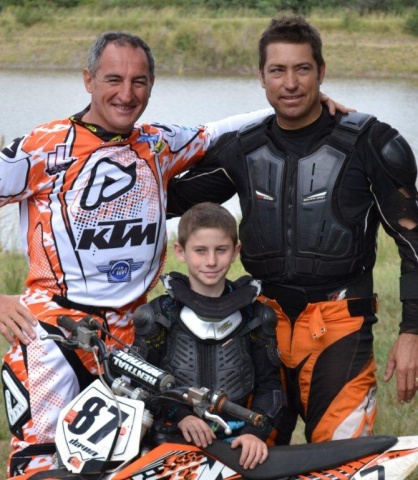 Over and above the team’s trophy, Kenya racked up first overall place in the B2 class.

In the Individual results, Brian Cocker from Zimbabwe emerged the winner followed by the Kenya’s duo of Anthony Nielsen and Alan de Boer. Two other Kenyan riders Shaun Miller and Ross Field finished 8th and 13th respectively. Nielsen admitted the tour of Zambia was indeed a very tough event.

“It was truly a well organised but we all suffered due to the heat. Special thanks to Anne Troughton and Abigail Gustafson for looking after the Kenya team. Big thanks to our sponsors Cimbria East Africa,” said Nielsen.

He said the team was the strongest Kenya has ever fielded. “We now want to be recognised all over Africa for our exploits. We have proven beyond reasonable doubts that we can ride as well as perform,” said Nielsen, who rode a Husaberg 450cc.

“Having prepared the Kenya team for two months, the Kenyan riders have demonstrated their potential in being a force to reckon with. Kenya will bid to host the 2015 Africa enduro continental championship,” Maina said.

Alan and Nielsen are using several off-road events across African as a dress rehearsal for their “fairy tale” participation in the 2015 Dakar Rally.

The event was open to all riders and teams from FIM Africa member countries .

Meanwhile, Kenya will send a strong team of riders to first round of the FIM Africa Central Africa Challenge to be held on April 19-20 in Kampala, Uganda.

The country shall also be entering a team to the FIM Africa continental motocross championship scheduled for Zambia in August.