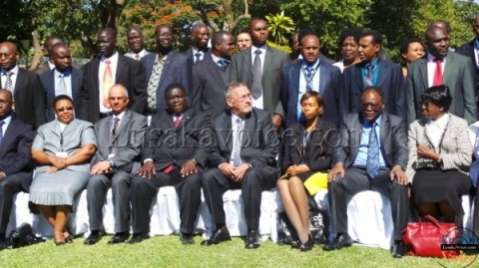 Dr. Scott says government wants to ensure that state owned companies like Mansa Batteries are brought to life like in it has done in the case of Nitrogen Chemicals. Dr. Scott has observes that government is convinced that there is still sufficient Manganese in Luapula Province to resuscitate Mansa Batteries. Dr. Scott says by bringing to life of Mansa Batteries, government will be fulfilling its promise of reducing unemployment levels in the province and the country as whole. And Dr. Scott has reiterated that the Patriotic Front (PF) government’s commitment to developing the country in the way it is doing it is all in line with the PF manifesto. Dr. Scott notes that the PF government will now cut down on making rhetorical speeches about what it is able to do to concentrate on implementing developmental projects it has planned in fulfilling the promises to it has made to the people in the country. Dr. Scott was speaking in Mansa District when he officially launched construction of Mansa township roads under the Pave Zambia 2000 Road Projects. The vice president later proceeded to address a rally at Mushinka grounds in Mansa Central constituency in what seemed to be a preparation for a by-election which is imminent in the area following the death of the area Member of Parliament Kennedy Sakeni. And speaking at radio program at Kfm, Dr. Scott also disclosed that the PF would prefer to field a candidate who is a resident of Mansa and popular among the people and in the party when the by-election comes forth in the area. The vice president has also maintained that the PF has no intentions of blackmailing people of Mansa when the by-elections comes forth because the people in the area and in the country have already seen what the ruling party has done in the two years it has been in power. Dr. Scott is in Mansa yesterday and he is accompanied by Lands and Natural Resources Minister Harry Kalaba, Home Affairs Deputy Labour Minister Ronald Chitotela, Deputy Home Affairs Minister Nickson Chilangwa, Deputy Minister of Chiefs and Traditional Affairs Susan Kawandami and former Minister of Defense Davies Mwila.