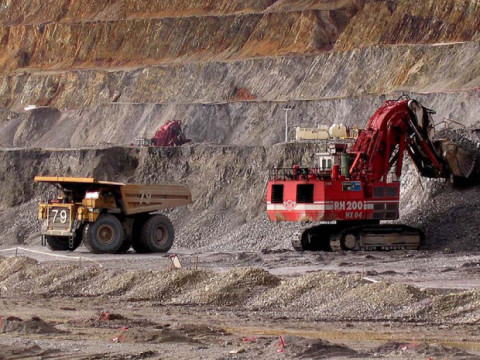 GOVERNMENT has called on management at Kalumbila Trident mine in Solwezi to promote industrial harmony so that the mine continues with production and paying appropriate taxes.
Minister of Home Affairs Davies Mwila says a lot of money has been invested at Kalumbila Mine, adding that Government is happy that the mine is contributing to the creation of employment for the people in line with the Patriotic Front (PF) manifesto.
Mr Mwila urged management at the mine to help keep jobs for the people by promoting industrial harmony.
The minister said this in Kalumbila on Saturday during a meeting with management following reports that over 12 workers have been sacked for participating in an illegal strike on January 5 this year after the death of a miner.
“As PF government, we promised our people that we shall create jobs and Government is happy with the investment at this mine as it has created jobs for the people, hence there is need for you as management to promote industrial harmony and protect people’s jobs,” Mr Mwila said.
He also cautioned management against engaging expatriates for jobs that can be done by Zambians.
Mr Mwila also said that Government is willing to dialogue with any mining company that has concerns over the newly-introduced mineral royalty tax.
And Kalumbila Mine assistant general manager Tristan Pascal said the strike action by the miners was illegal.
Mr Pascal said this is what prompted management to dismiss four employees, among them a union branch chairperson, for allegedly inciting workers to down tools.
Earlier, First Quantum Minerals (FQM) country manager Kingsley Chinkuli said the mine is ready to dialogue with the government to bring about industrial harmony.
General Chinkuli said the mine is committed to industrial harmony and to operate within the confines of the Zambian labour laws.
“We want to assure you that we shall work within the confines of the law and we also committed to the process of promoting industrial harmony,” he said.
Gen Chinkuli also congratulated President Lungu on his election as Zambia’s sixth President.
“On behalf of First Quantum Minerals, I would like to congratulate the PF for winning the election and we also congratulate President Lungu for being elected into office and we assure him of our support,” he said.
And Mineworkers Union of Zambia (MUZ) vice-president Godfrey Kupila accused management at Kalumbila Mine of violating the Zambian labour laws by dismissing the workers even before the disciplinary process is exhausted.
Mr Kupila, who spoke on behalf of other union representatives, said the dismissed workers who were occupying mine houses have been given a 48-hour ultimatum in which to vacate the houses without giving them time to appeal.
The minister was accompanied to Kalumbila by North-Western Province Minister Dawson Kafwaya, provincial permanent secretary Amos Malupenga, Solwezi district commissioner Crispin Likando and other officials from the Ministry of Labour and Social security.