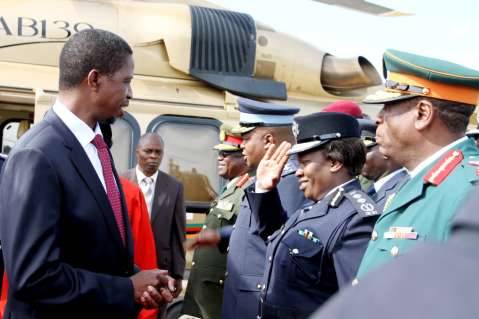 Kitwe. 08.08.2018.
The National Democratic Congress NDC has welcomed the decision by President Edgar Lungu to dismiss Zambia Air Force ZAF commander General Eric Chimese.
We urge the Anti Corruption Commission ACC to immediately probe General Chimese.
We have credible information that Gen. Chimese might have been involved in a number of corrupt activities during his seven year stay as ZAF commander.
We have in mind the 62 million United States dollars contract for the supply of military uniforms that Gen. Chimese single sourced on 11 August 2017.

As NDC we have information that Gen. Chimese single sourced a local firm BHB contractors to supply uniforms to ZAF at an inflated price.
BHB is a local company situated at plot number 407 Independence Avenue Lusaka.
Gen. Chimese single sourced this firm to supply expensive military regalia when a Kenyan firm, PURMA was ready to supply the same uniforms at 14 million U. S dollars.
We urge the ACC to go further and probe all the civil servants including a Permanent Secretary who are linked to the 62 million dollars scandal.

Brigadier General Wilfred Mbewe was Chief of Supply at ZAF when this deal was dubiously signed.
Gen. Mbewe and others opposed this deal but was removed from his office by Gen. Chimese.
A number of officers such as Brigadier General Chibesa who was in charge of Finance were unceremoniously retired for opposing this deal.

Gen. Chimese has left ZAF in a mess and should be probed immediately so that his name is cleared.
The NDC further urges President Lungu to fire Zambia Army Commander Paul Mihova.
Gen. Mihova is involved in a lot of dubious activities at the army.
As NDC, we have the full details of the proxy that Gen. Mihova is using in South Africa to loot Zambia Army resources.
Issued by: Mwenya Musenge. Secretary General NDC.