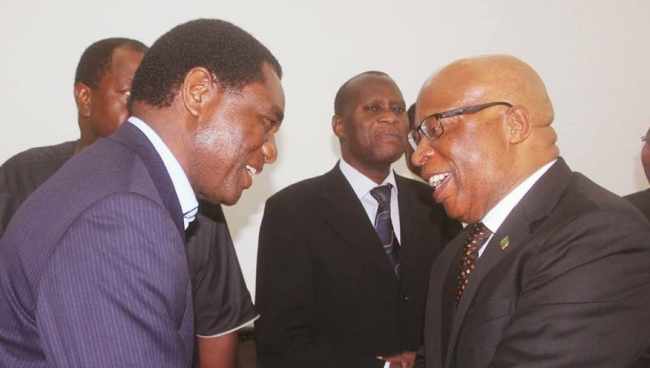 By Nevers Mumba
A few days ago, you ran an editorial which you call the opinion of [News] Diggers! In that editorial you attempted to give your opinion on what you think is happening in the Movement for Multi-party Democracy. I think the question you were trying to ask was ‘what is Nevers and Mutati fighting over?’ as far as you are concerned, there is no MMD to fight for, it’s only an empty thing that has been devastated through the difficulties that we have gone through and in your own assessment, gave it zero chances of ever forming government again, raising the question of ‘why then fight for an entity in that state?’

I thought because of the way you have started your media house by being extremely objective in the manner that you have been carrying out certain subjects, I thought I needed to explain to you so that you understand what is the basis for my joining the political scenario. Because of lack of understanding of what Nevers Mumba is doing in the politics, the opinion you gave would be what will be coming out of you but it is totally off, as it does not represent who I am.”

“The sad story about your opinion was to suggest that Nevers Mumba wishes to salvage or get MMD so that he can sale it to the highest bidder. I think that is a very unfair statement, especially that I have tried by all means and in many ways to explain to the media and Diggers in particular as to really who I am and what I stand for. My mission to the politics of Zambia is to insist that unless we get men and women of integrity to participate in the politics of this country, we should not expect any prosperity to come to our country, we should not expect any change to the current crisis we are facing.

I am also glad that my colleague KBF has released a book and from what I read, his concern is the fact that Zambia is a country that prides itself in voting for criminals, people without morality, values and integrity and yet this message, has been my message for 23 years. So I got involved in the political process in order to infuse morality and integrity in the politics of the country. The journey has been rough because God never told me it would be easy. It’s like anything, if you want to change the status quo, it’s very costly.

My goal has never been to join politics, my goal has been to change the way politics are done in this country. I think that I owe it to Diggers to explain that the last thing they can put on head is to say that I want to sell MMD, to whose benefit is that selling? To Nevers Mumba? So that I can have an opportunity to have a job in the political arena? Far from it because that to me is not my vision for why I am in politics, maybe you need to read my story in the book “Integrity with Fire” and my other book “Zambia shall be Served”. I think those are going to help Diggers to understand that I am not here to join politics but I am here to change politics.

The reason why I am fighting over MMD is to ensure that never again should a ruling party or those with money and power go to a political party in a democracy and buy them out and switch the laws of the land in order to suit their desire, in this case towards the 2016 elections where they wanted the numbers of MMD to help the PF. They broke the constitution of the party and used power and money to create another MMD and put Felix Mutati as the President. They used the media to propagate that this is the new MMD without any regard for the laws that govern the country and the party itself.

“You people also assumed in your writings that Nevers Mumba has joined UPND, I have never joined UPND. And you keep pushing that because of the alliance that we formed in the last elections. But alliances are formed everyday, PF itself formed an alliance with UPND. Mr Sata and Mr Hakainde; that didn’t mean that Mr Sata was UPND neither did it mean that Mr Hakainde was PF. This is why I have called on you because I don’t mind any other media organisation misinterpreting this fact but not Diggers, we are counting on Diggers to arise as a media house that can have the integrity and the respect that is going to make Zambians feel that they have got a media house that they can depend on. I just needed to explain that what you suggested where you where also saying that I was trying to impress HH is not correct and it was unfair on my part, I just thought I should explain this fact.