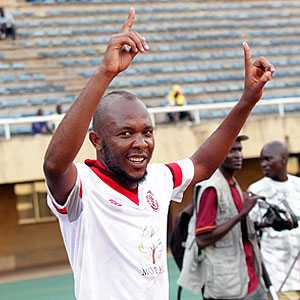 Zambia defender Christopher Munthali has won Power Dynamos’ 2015 player of the year award.
The defender, who scored three league goals and two for his country in 2015, was one of three defenders honoured by Power at the end of season awards ceremony on Friday night in Kitwe.
This is Munthali’s first award at Power where he has spent six seasons but made his name away from the club on loan in 2013 and 2014 at Nkana before returning in 2015 and he was finally handed a starring role in the just-ended campaign at the six-time champions.
“I am very happy to win the player of the year award this is my first award at Power and I am very happy and I say thanks to the coaches, management and supporters for voting for me,” Munthali said.
Munthali said he is not surprised for winning the award during a difficult season for Power who finished 3rd, a drop from their runners-up finish in 2014.
“I was expecting this award and I was expecting to win at least two awards,” Munthali said.
“I am very disappointed to have come third. Power Dynamos is a big team and we were expecting to come in first place or second.”
It was a night for defenders at Power when Govender Simwala who took home the most disciplined and players’-player awards while left-back Lawrence Chungu won the most consistent player prize.
Striker Martin Phiri, who scored six goals for Power in 2015, won the chairman’s most improved player award.
© Supersport.com