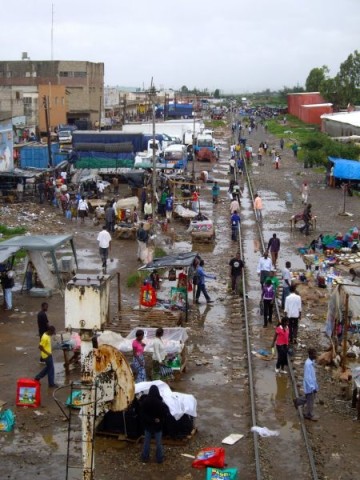 A JOINT operation by Lusaka City Council (LCC) and Zambia Police yesterday demolished make-shift stalls along Kamwala ring-road.
LCC assistant public relations manager Brenda Katongola said the operation, which was carried out yesterday at night, was aimed at bringing down illegal markets that have been built by residents closer to the railway line.
“The council has decided to demolish these make-shift stalls because they are built in areas which are not demarcated as market place. The stores are being used as a centre for the sale of illicit drugs and alcohol. it has become a dumping site and a threat to public health,”she said.

Ms Katongola also said the demolition exercise was done in line with the Smart Zambia campaign that was launched by the Ministry of Local Government and Housing.
“This has also been done under the concept of the clean Zambia campaign, through which we aim to see Lusaka city becoming a clean place of law and order after 51 years of independence. As the local authority, we want to effectively bring order in the city,” she said.
Ms Katongola cautioned the residents of Lusaka to discontinue the trend of putting up structures at any location without the consent of LCC.
“We are keeping an eye on the members of all the communities. We will not accept any dumping of solid waste. People must abide by the law and pay the garbage collection fees. those found to have failed to do so and found throwing waste in public places risk paying a minimum penalty fee of K450 or risk six months imprisonment,” she said.
The 36 council police officers with sledge hammers assigned to carry out the demolition exercise with the help of a grader discovered three traditional healers who had built shacks at the very illegal market along ring-road in Kamwala.