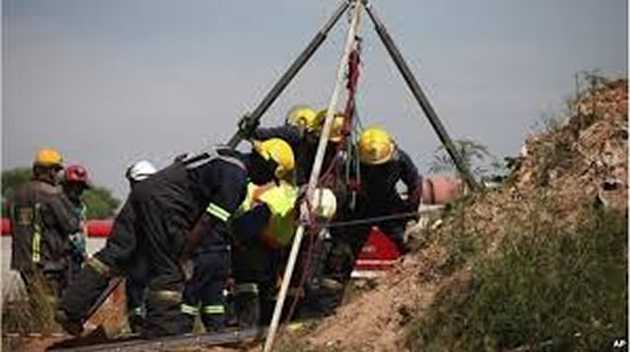 South Africa emergency workers retrieved 11 bodies of Zimbabweans who were killed when a generator they were using in a disused underground mine exploded in Benoni, 35km outside Johannesburg, South Africa. The group, which comprised 15 people —among them Zimbabweans and Mozambicans — reportedly entered the mine on August 27 using the generator for lighting and drilling.

During the process, they started a fire using planks which produced toxic gases which then mixed with carbon monoxide from the generator which also exploded. The group died of asphyxiation (oxygen deprivation) while a few managed to escape and made a report to the police.

The mine is located in the Springs area of Benoni. Benoni police spokesperson Captain Tsekiso Mofokeng said the victims were retrieved by emergency workers with the assistance of relatives.
“We concluded the search on Tuesday last week and we have since taken the bodies to Germiston Government Mortuary where we are conducting pathological tests. “The bodies were identified as those of Zimbabweans by their relatives who also stay in the same area (Springs).

“As police we are appealing to members of the community to stop illegal mining activities as they risk their lives and prosecution”. He said further investigations into the accident were underway. According to Zimbabweans who live in the same area, there could be more bodies under the same mine.

“My uncle is also missing and we are convinced he is one of the people who could have died in the mine. “Normally these guys take an average of three days underground but we have gone for two weeks without having a word from him. We will continue searching for him and engaging the police for assistance,” said Mr Tafadzwa Paradza.

Mr Paradza said there were known dangerous areas with poisonous gases in the mine, adding that some of the search teams were afraid to get to those points. Zimbabwe’s Consul General to South Africa Mr Batiraishe Mukonoweshuro was not available for comment yesterday. The incident comes a year after 22 Zimbabweans perished in a disused gold mine in Roodeport, South Africa in May 2014.