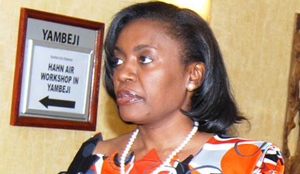 THE Lusaka High Court has dismissed Thandiwe Banda’s appeal against deputy registrar Sharon Newa’s dismissal of her application to have a matter where a fashion designer sued her for breach of employment thrown out.

In this matter, John Muyabi sued Thandiwe, Rupiah Banda’s wife, claiming loss of earnings and failure to pay his salary and housing allowance for over 30 months which is continuing at the rate of K5,000 per month.

Thandiwe filed an application in which she wanted the court to dismiss Muyabi’s case against her because it was wrongly before court.

She argued that Muyabi commenced an action against her in the Industrial Relations Court based on the same facts and his application was dismissed for being out of time, after which leave to appeal was granted to him.

Thandiwe also submitted that instituting a matter in the High Court was not appropriate because it was already dismissed by the Industrial Relations Court.

However, High Court judge Annie Sharpe-Phiri in her ruling on the matter, dismissed Thandiwe’s five grounds of appeal against Newa’s holding.

Judge Sharpe-Phiri said the High Court had jurisdiction to try the case arising out of pure master and servant relationships.

“The statement of claim shows the respondent’s claim for breach of contract and loss of earnings arises from a pure master and servant relationship and as such the claim falls within the jurisdiction of the High Court,” judge Sharpe-Phiri said.

She also found that Muyabi’s complaint against Thandiwe for the breach of contract and loss of earnings had not been determined on its merits or adjudicated upon by the Industrial Relations Court.

“The matter having neither been heard nor determined by the Industrial Relations Court is therefore properly before the High Court,” she said.

She further said Muyabi’s claim against Thandiwe had not been heard or determined by any court of competent of jurisdiction and as such was properly before her.

Judge Sharpe-Phiri said Newa was on firm ground when she held that the matter was properly before the court.

“I accordingly uphold the decision of the deputy registrar. This appeal accordingly fails with costs to be borne by the appellant,” she said.