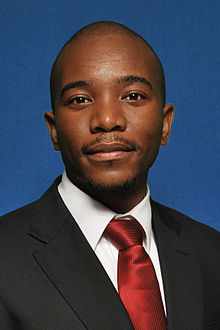 A part-time pastor is the man tipped to become the first black leader of South Africa’s biggest opposition party on 10 May and take the fight to the African National Congress (ANC), which has governed the country since the end of apartheid.

Mmusi Maimane is widely expected to take over as head of the Democratic Alliance (DA), following a vote by delegates at a party congress in the coastal city of Port Elizabeth.

Mr Maimane is seeking to replace Helen Zille, a white woman, who last month announced she would leave her post after eight years. While the combative Mrs Zille led her party to steady gains, including premiership of Western Cape province, which includes Cape Town, she has faced persistent criticisms that the DA is “too white” to govern South Africa.

Mr Maimane was raised in Soweto township, cradle of the anti-apartheid movement where Nelson Mandela once lived. At weekends he is a preacher at an evangelical Christian church in Cosmo City, a suburb north of Johannesburg.

With Mr Maimane the clear favourite among party delegates, the congress is awash with posters and T-shirts featuring a stylised image of Mr Maimane’s face and the word “BELIEVE”, recalling Shepard Fairey’s distinctive posters from President Obama’s 2008 campaign.

Mr Maimane, who is currently the DA’s parliamentary leader, drew praise for his powerful reply to President Jacob Zuma’s state of the nation address earlier this year, in which he described the South African president as “a broken man, presiding over a broken society”.

But while Mr Maimane is educated (he holds master’s degrees in theology and public administration), and ambitious (he rose swiftly through party’s ranks since joining the DA in 2009), some consider him too politically inexperienced to draw voters away from the ANC.