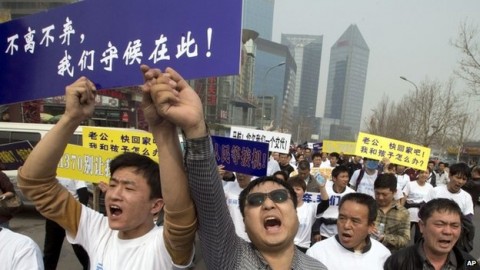 Angry relatives of passengers on board the missing Malaysia Airlines plane have clashed with police outside Malaysia’s embassy in the Chinese capital Beijing.

It came after Malaysian PM Najib Razak said a new analysis of satellite data showed the plane had ended its journey in remote seas south-west of Australia.

China has asked to see the data on which Malaysia’s conclusion was based.

The search for missing flight MH370 has been suspended because of bad weather.

A multinational search effort has focused on seas some 2,500km (1,500 miles) to the south-west of the Australian city of Perth.

Flight MH370 disappeared on 8 March as it flew from Kuala Lumpur to Beijing. It was carrying a total of 239 people, including 153 Chinese nationals.

In Beijing, relatives of passengers on board the plane released a statement accusing the Malaysian government of trying to “delay, distort and hide the truth”.

Dozens of them then left their Beijing hotel on a protest bound for the Malaysian embassy, carrying banners asking Kuala Lumpur to be truthful with the relatives.

Police blocked their buses from leaving, so they left the buses and walked there themselves, with scuffles then erupting outside the diplomatic mission.

The protesters threw water bottles at the embassy and tried to storm the building, demanding to meet the ambassador.

There was a heavy police presence at the embassy and there was a brief scuffle between police and a group of relatives who tried to approach journalists, according to AP news agency.

The protest in Beijing came a day after the Malaysian leader said it had to be concluded “with deep sadness and regret” that according to new data “flight MH370 ended in the southern Indian Ocean”.

Mr Najib said the conclusion the plane was lost was based on new satellite analysis by British firm Inmarsat and information from the UK’s Air Accidents Investigation Branch (AAIB).

Mr Najib said Inmarsat had been able to shed further light on the plane’s flight path by performing further calculations “using a type of analysis never before used in an investigation of this sort”.

But Chinese Deputy Foreign Minister Xie Hangsheng issued a statement saying “We demand the Malaysian side state the detailed evidence that leads them to this judgement as well as supply all the relevant information and evidence about the satellite data analysis.

Speaking at a news briefing on Tuesday, acting Malaysian Transport Minister Hishammudin Hussein said that as a result of the work by Inmarset, the area of search operations had been narrowed from 2.24m sq nautical miles to 469,407 sq nautical miles.

Operations in the “northern corridor” – one of two large areas where the plane might have ended its journey – had been completely called off to concentrate on the “southern corridor” in the Indian Ocean west of Perth, he added.

Mr Hishammudin said an international working group had now been convened to try to further narrow the search area.

Malaysia Airlines has said it will make arrangements to fly relatives to Australia.

Australian Immigration Minister Scott Morrison said his department was working with the airline and Beijing to arrange visas.

Planes from several nations, supported by an Australian warship, have been scouring waters far off Perth for signs of the missing plane, in a search co-ordinated by Australia.

There have been several sightings of debris, but none has yet been confirmed as being linked to the plane.

In a statement announcing the suspension of search operations on Tuesday, the Australian Maritime Safety Authority (Amsa) said it had undertaken a risk assessment “and determined that the current weather conditions would make any air and sea search activities hazardous and pose a risk to crew”.

He described the search as a “massive logistical exercise” in an “extremely remote” part of the world.

Mark Binskin, vice-chief of the Australian Defence Force, said: “We’re not searching for a needle in a haystack. We’re still trying to define where the haystack is.”

An Australian navy support vessel, Ocean Shield – equipped with US acoustic detection equipment in an attempt to detect the plane’s “black box” flight recorder – is expected to be deployed to the search zone next week.

Six Chinese ships are also being deployed to the region to assist with search operations.