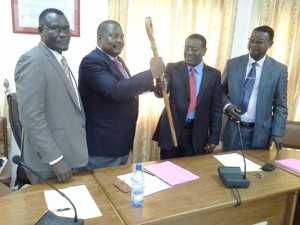 THE government of Benin has tipped Zambia as a model in the financing and development of road infrastructure in sub-Saharan Africa.
Minister of Public Works and Transport Ake Natonde said his country has a lot to learn from Zambia’s best practices in the administration and management of road funds.
Mr Natonde said this in Cotonou last week during the handover ceremony of the presidency of the African Road Maintenance Funds Association (ARMFA) to the National Road Fund Agency (NRFA) director and chief executive officer Anthony Mwanaumo.
This is according to a statement released in Lusaka yesterday by NRFA spokesperson Alphonsius Hamachila.
And ministry of finance deputy accountant general Joel Ukwimi, who represented the NRFA board, expressed appreciation to Benin for the well-coordinated leadership during that country’s two- year tenure of the ARMFA presidency.
Mr Ukwimi thanked the government of Benin for the invaluable support it has accorded the 34 member association and called on the Benin Road Fund and the NRFA to address common challenges by sharing knowledge and experiences.
Chief executive officer of the Benin Road Fund Sylvestre Kotchofa observed that the continental association had innovatively rolled out a networking programme through its Southern, Eastern, Western and Central Focal Groups.
Mr Kotchofa expressed hope that Zambia, through the NRFA, would take ARMFA to the next level of success.
In accepting the ARMFA presidency, Dr Mwanaumo pledged to build upon his predecessor’s legacy of consultative leadership.
“In execution of the mandate before us, and in tandem with aspirations of member countries, we shall strive to interface with regional, continental and world organisations to gain valuable insights for a broadened resource mobilisation strategy for us all,” he said.
While in Benin, the Zambian delegation led by Mr Ukwimi paid a courtesy call on the Deputy Minister  of Public Works and Transport Abdoulaye Assoudo and his permanent secretary Fidele Milohin and the director general of Public Works Donne Amouzou.
Zambia, through the NRFA, will hold the ARMFA presidency from this year to next year.
ARMFA’s focus is on networking and sharing of best practices in management of road funds in Africa.