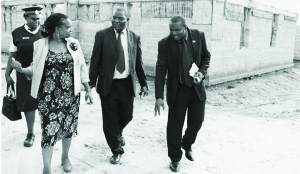 GOOD infrastructure is a key ingredient to national development which Government has prioritised countrywide to uplift the lives of people.
President Michael Sata’s creation of new districts and subsequent launch of rehabilitation and construction of roads through the Link-Zambia 8000 project, have opened up more jobs for citizens.
Southern Province is one such area where Government is delivering infrastructure development through investments in construction, rehabilitation of roads, buildings and investing in livestock sector.
The creation of Chikankanta, Pemba and Zimba as new districts in the province has facilitated for new employment opportunities in key sectors such as health, agriculture and education.
Poor infrastructure, however, still remains a challenge in rural areas and Government has embarked on implementing more strategies to advance development in all districts across the province.

Chikankanta District
In this newly-created district, Government is in the process of constructing the district administrative offices and more than 20 housing units for civil servants costing about K16.7 million.
The construction of the offices, was however, recently marred by divisions involving Chieftainess Mwenda and Chief Nalwama over the construction site.
Chieftainess Mwenda and Chief Nalwama were reported to be in a boundary dispute regarding whether to construct the administration block at Nega-Nega turn off or Kasamu turn off.
District Commissioner Sylvester Simayaba however, said the dispute was resolved and that the projects would be undertaken at Nega-Nega turn off in Chief Nalwama’s area.
The buildings department under the Ministry of Transport, Works, Supply and Communications in Lusaka has completed the architectural drawings for the proposed district administration and housing units.
He said the 40-kilometre stretch of gravel road from Chikankanta turn off to Chikankanta High School would be tarred under the third phase of the Link-Zambia 8000 project.
The district council recently procured four pieces of heavy-duty machinery which include a tipper truck, grader, roller compactor and a back-hoe loader worth over K1.4 million under CDF of 2012 for maintenance of various road networks in the area.

Pemba District
President Sata’s initiative to create Pemba as a new district, detaching it from its mother district Choma, has brought development closer to the people of Pemba.
This year, Pemba District Council proposes to spend about K12 million representing budget growth of 38 per cent from 2013 budget allocation.
Council treasurer Collins Ndilema outlined key projects to be implemented such as construction of a civic centre, 10 medium cost houses, bus station and two market ablution blocks.
District Commissioner Reginald Mugoba said the Public-Private Partnership (PPP) initiative has created strong links between Government and NGOs who are firmly delivering desirable development to rural areas.
True to his words. World Vision Zambia (WVZ), has handed over school infrastructure projects at Ndondi Secondary School in Pemba funded by Christ Presbyterian Church of America at a cost of US$1,388,000 (about K6,940,000).
The facilities are four staff houses, one by two laboratory, a twin ablution block and a mechanised water reticulation system for the school which Government will make it a full-fledged school.
WVZ board chairperson Mumba Kapumba said at the handover ceremony that the organisation in partnership with the church would support Government’s initiatives to attain the Millennium Development Goal (MDG) of providing education by 2015.
Mr Mugoba said Government has since engaged a Chinese contractor to complete remaining structures at the school such as home economics class, library and 13 classrooms.
He said, the residents of Ndondi were not spared from the problem children dropping out of school especially girls who were lured into early marriages.

Namwala District
The district is known for wealth in cattle rearing among residents.
Here, the Government has successfully completed construction of a K32 million Niko Technical Girls High School to improve access to quality education particularly the girl-child.
The district has only two boarding schools namely, Namwala Secondary School and the Kasenga Girl. Niko Technical Girls High School is located in Chief Nalubamba’s area, about 100 kilometres north-west of Choma.
The Government has so far, deployed 33 teachers to the school and most of the Grade nine girls who passed to Grade 10 in Namwala are being enrolled at the new school.
Namwala District Commissioner Gavia Nsanzya said the completion of the school project was a significant landmark for people in the district to improve access to quality education for the girl-child.
“This is a landmark that the people of Namwala have received this year. This school project has successfully been completed by Government and it is now functioning well and many Grade 10 pupils are being enrolled,” he said.

Siavonga District
It is a key district in stimulating Zambia’s economy because of it holds the mighty Kariba dam from which Zesco generates electricity to supply to the nation and some neighbouring nations.
In Siavonga, the Government in partnership with the United Nations Development (UNDP) has completed the construction of a K2.5 million dam in Chief Chipepo’s area.
The Ministry of Agricultural and Livestock has intensified the construction of an irrigation project at a cost of about $10,000 in Kuyuni area near Lusitu stream to cater for more than 28 households to make it resilient to effects of drought.
District Agricultural Coordinator Katupa Chongo said at a recent planning and review meeting in Choma for all senior agricultural officers that the dam was constructed under Climate Change Adaption Project to enable farmers in the area fight climate change.

Gwembe District
This is a mountainous district with fine-looking rocky areas of which investors could utilise to establish various investments such as hotels or lodges.
In this district, the Government is constructing a new secondary school project in Munyumbwe area costing about K48 million.
Munyumbwe would be the first-ever high school in Gwembe which Provincial Educational Officer (PEO) Stephen Chishiko said was progressing well.
Mr Chishiko said that the school project has reached 80 per cent and a Chinese contractor engaged to construct it, was currently working on water reticulation and electrical facilities.

Mazabuka District
One common feature Mazabuka is known for, is being ‘The Sweetest Town in Zambia’ not that it tastes sweet itself, but, because of its renowned production of sugar by Zambia Sugar PLC.
On the other hand, Mazabuka is a hub of livestock rearing.
Magoye is one of the constituencies in Mazabuka where residents have praised Government for implementing various agricultural projects citing recent upgrading of nine dip-tanks in the area.
The Government had released more than K250,000 for the rehabilitation of deplorable dip tanks in the district in which the larger portion of funds, was used in Magoye.
Abel Siambwiko, is among small-scale farmers rearing cattle in Magoye, who described Government’s move to upgrade the dip tanks as massive development in the fight against livestock diseases.
“What Government has done is a commendable job, the dip tanks have been rehabilitated and this is good move because we are now assured of dipping our cattle,” he said.
Mazabuka District Commissioner Eugene Munyama said, Government had rehabilitated nine dip tanks in Magoye which were ready for use by residents.
He said Magoye received a larger portion of funding for upgrading of the facilities because of increased agricultural economic activities endowed in the area such as cattle rearing.
On road networks, the Rural Roads Unit (RRU) is rehabilitating the Chivuna-Nkokola-Namaila road, which had remained in poor state since 1970s. So far, RRU has upgraded a stretch of 60 kilometres of the road and has remained with less than 10 kilometres to complete the road which connects Mazabuka to Magoye.

Sinazongwe District
The district is endowed with tourism attractions and the local authority has urged the Ministry of Tourism and Arts to help market the packages to investors.
District Council chairperson Cliff Siachipweka said the opening of a tourism office in Sinazongwe will boost untapped tourism attractions because it is gifted with many Islands on Lake Kariba, beautiful mountain sites with wild animals and birds.
He said the council has embarked on a pilot project to fix modernised solar water boreholes in remote areas of the district to supply clean water to residents.
The project is costing one borehole fitted with a solar panel and tank about K120,000 and that more than 3,000 residents could benefit in intended areas of Sinamalima, Maamba and Sinazeze.
Under CDF allocations, many rural health posts are under construction in communities such as Sinakumbi and Sinakasikili at a cost of K180,000 each.
A few days ago, an American business executive, Brian Maydew, handed over a one by three classroom block at Siananjola Primary School in the district at a cost of K130,000.
The school, run by Pilgrim Wesleyan Church (PWC), had its classroom block extensively damaged by heavy rainfall experienced in the area.

Choma District
Choma, the new robust provincial capital has become an engine of growth for the province with a strong economic base because of its arable and livestock agriculture.
More banking institutions are being set up with the recent being Investrust PLC whose contribution to creation of quality jobs, has impressed Government.
Finance Minister Alexander Chikwanda said when he commissioned the Investrust Bank Choma Branch that the institution has created from 178 employees in 2007 to 398 at the end of 2012 and as at July 2013, the bank had about 439 employees.
In addition to private sector investment, Government is carrying out developmental projects in such as on-going construction of over 60 high, medium and low-cost houses for civil servants.
Adjacent to the houses, China Jiangxi Corporation Limited (CJCL) is building a giant six-storey provincial administration by at a cost of K31 million.
Provincial Permanent Secretary Margret Miyoba is happy the projects have reached an advanced stage with most houses almost reaching the roofing levels.The houses are expected to be completed by June this year while the provincial administration would be completed before December.
Golden Horse Limited was engaged to construct 30 low-cost houses, African Contractor Limited 20 medium-costs houses while World Tech Engineer was brought in to construct 12 high-cost houses for civil servants in Choma.
Senior engineer, Yang Cinghong said his company was making substantial progress on the 30 low-cost houses but he bemoaned inadequate funding from Government.
Other projects in Choma such as K500, 000 contract awarded to Afriwoods and Development limited to install a stretch of three-kilometre street lights project along the Lusaka-Livingstone road was yet to be completed.
On urban roads, Local Government and Housing Permanent Secretary, Howard Sikwela said 20 kilometres of selected roads in Choma will soon be tarred after a suitable contractor is selected.
Provincial Minister Daniel Munkombwe urged parastatal institutions to help Government in fostering a flourishing economy and create of job opportunities for the locals.
As Government, continues to outline its national developmental agenda, more stakeholders should help shift the country to a higher step on the ladder of development for citizens.